Home Story A Muddy Walk through the Mountains of the Moon

A Muddy Walk through the Mountains of the Moon

Tales from deep within the UNESCO listed Rwenzoris mountain range. 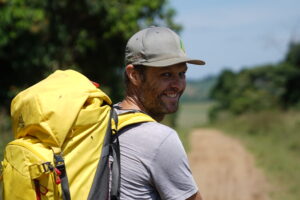 Jan Bakker Jan develops and promotes underrated and underexposed adventure destinations through his work as an expedition leader, guidebook author and outdoor tourism consultant in places like Iraqi Kurdistan, Tajikistan and Uganda, where he currently lives with his family.

From the savannah plains of Queen Elizabeth National Park in the west of Uganda, the Rwenzori Mountains look rather unassuming. Most of the time obscured by cloud cover, the summits hide their true grandeur. Only as you get closer, heading up the river valleys does the scale and complexity of this place gradually become apparent. With a team of intrepid travellers, gathered by expedition specialist Secret Compass, we venture deep into this little-visited UNESCO-listed mountain range. 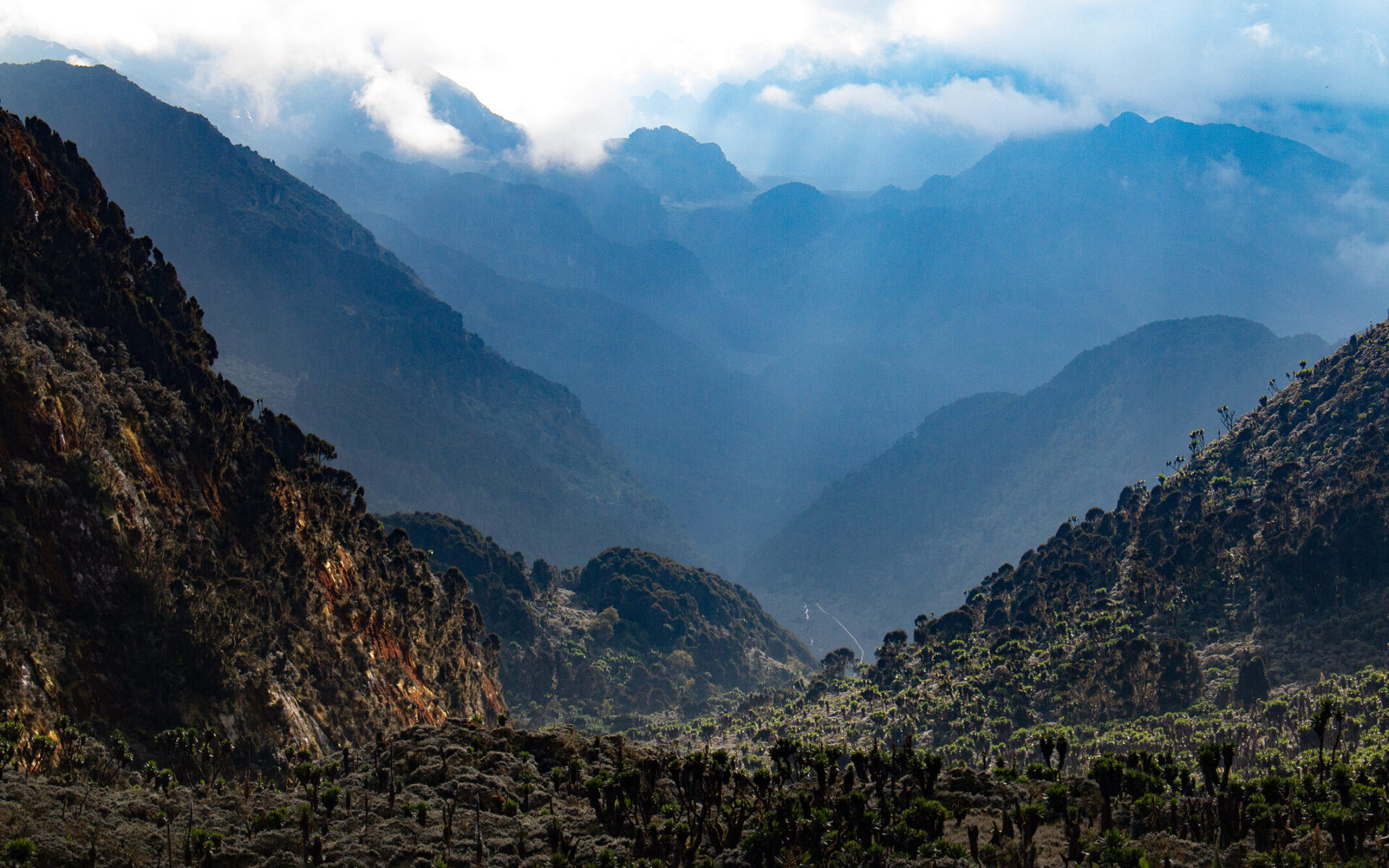 Straddling the border of DR Congo and Uganda, the Rwenzoris form the tallest mountain range on the African continent. Their nickname, the Mountains of the Moon, goes back almost 2000 years, given by Alexandrian geographer Claudius Ptolemy who gathered geographical information from Arab traders about this mysterious snow-capped mountain chain in the heart of Africa. It was explorer Henry Morton-Stanley in the late 19th-century who confirmed the existence of these mountains and more appropriately adopted the name Rwenjura, meaning rainmaker which has now been corrupted into Rwenzori. The highest point of the range is the glaciated Margherita Peak at 5109 metres, the fourth highest in Africa.

Our trek starts in the mountain hamlet of Nyakalengija, nestled on the banks of the roaring Mubuku River. There’s a lot of commotion in the village with the arrival of a group mzungus, as westerners are collectively known as in East Africa. Mountain tourism is the main reason for foreigners to visit, and usually means an army of porters is recruited to haul equipment and supplies up the mountain. It’s a rare job opportunity that attracts scores of people from the entire valley.

After registration and weighing the loads, the 13-strong international team – ten nationalities between us – start ascending the dirt track through fields of cassava and matoke trees towards the real trailhead, marked by a large gate and a small wooden shack manned by the Ugandan Wildlife Authority. The UWA here manages the Rwenzori Mountains National Park, a challenging task given the size of this mountain area and human kind’s unquenchable thirst for natural resources. 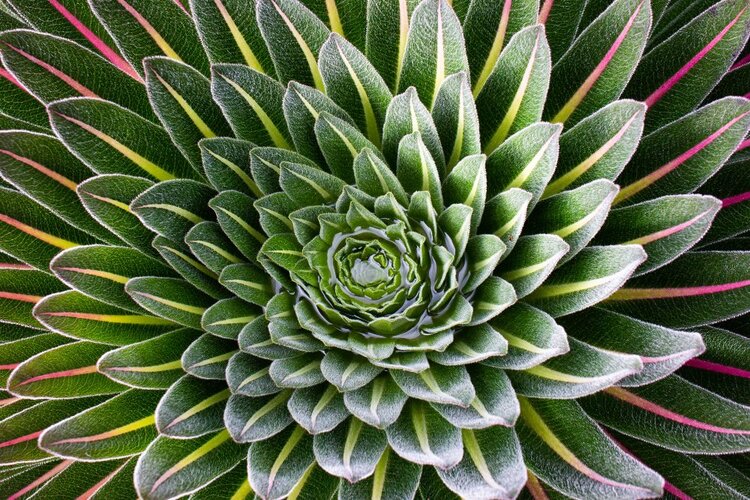 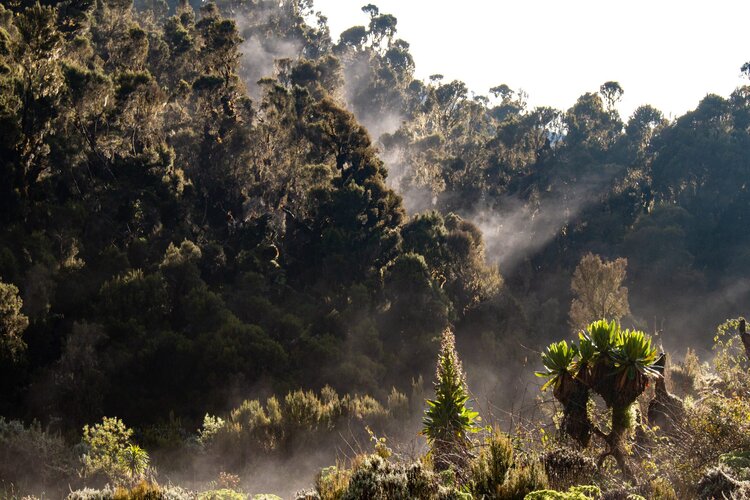 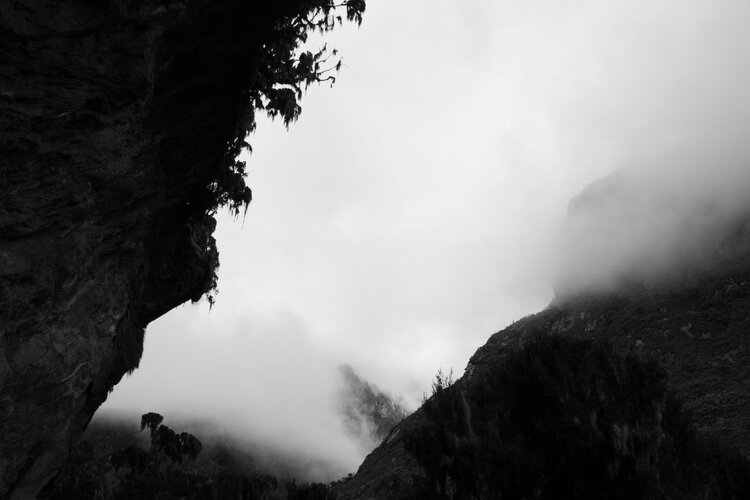 The Rwenzori’s Central Circuit is no normal trek, in fact it’s as challenging as trekking gets 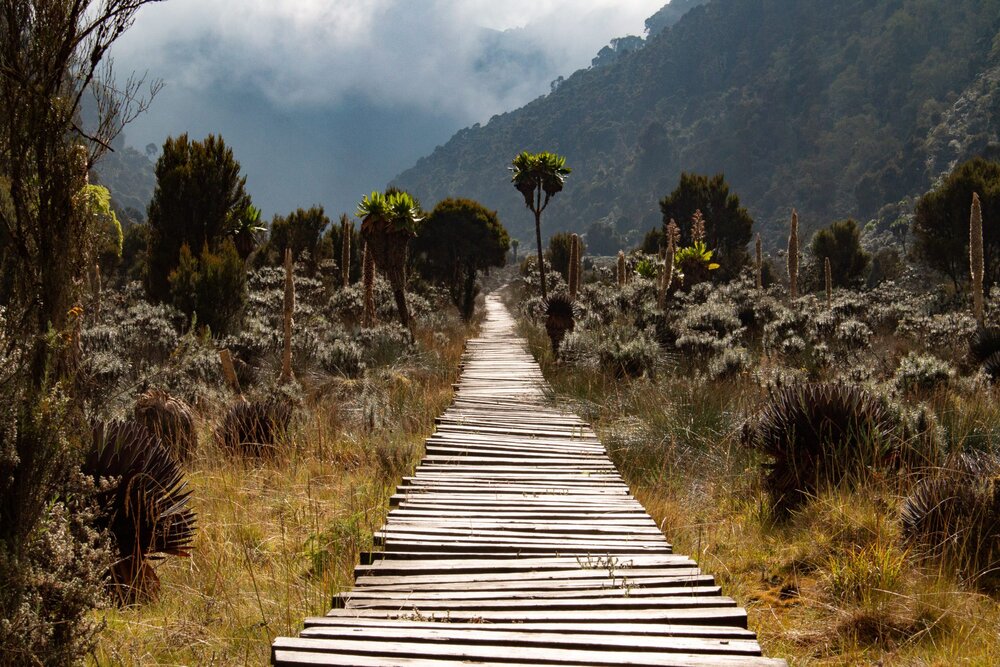 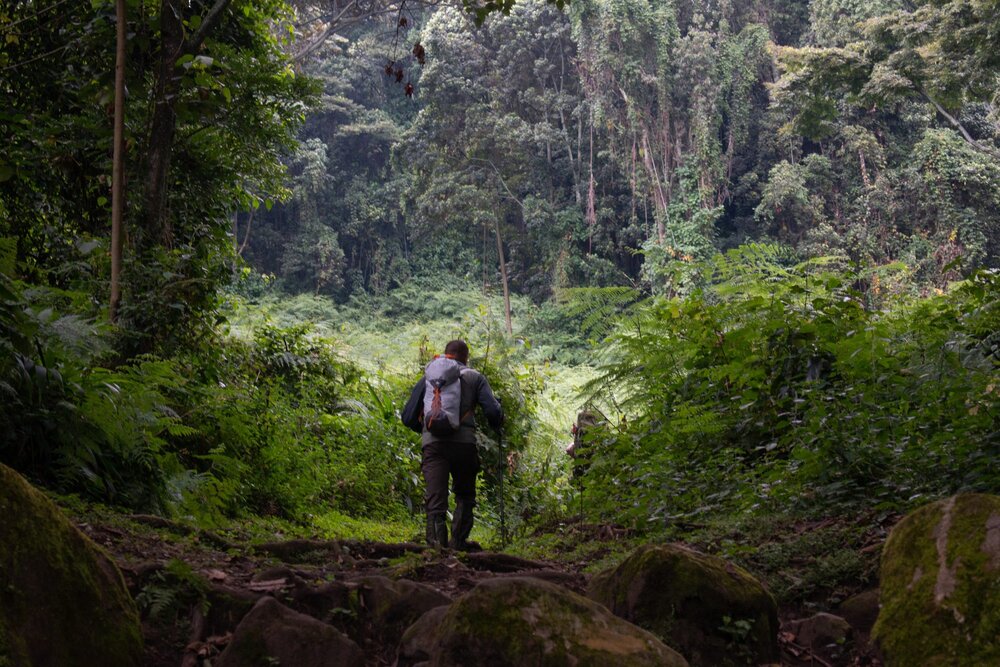 The transition from the civilised world to the dense untouched rain forest is immediate and dramatic. We’re entering the Afro Montane Forest, a mountain zone teeming with wildlife. In the distance, we hear brawling chimpanzees while along the trail we look for chameleons, which with our untrained eyes, proves incredibly difficult. The trail is in excellent condition and we wonder why the Rwenzori trails have such a notorious reputation. It’s an easy stroll, taking us just three hours to reach the brilliant Nyabitaba Hut at an altitude of 2660 metres. From the ridgeline where the hut sits, we see the tops of the spiky Portal Peaks rising above the cloud cover across the valley.

As we leave the hut, the trail disappears. What’s left is a narrow stream bed with an extremely muddy bank, every step requires careful foot placement. That morning, our local guide Jethro claimed it would take us six hours to do the 8.5km to the Guy Yeoman Hut. That’s an average walking speed of 1.5km/hr. It was hard to believe when we set out, but his estimation soon made sense as our legs are sucked down in the calve-deep bog.

Crucial kit advice was to do the trek in Wellington boots. An unusual choice of footwear on a multi-day trek in normal circumstances, but the Rwenzori’s Central Circuit is no normal trek, in fact it’s as challenging as trekking gets and makes the standard route on Kilimanjaro look like a walk in the park. Wellies are definitely no luxury item here and we’re soon due a reminder why these mountains are called Rainmaker.

After ploughing through the mud for three hours we arrive at the base of a formidable barrier. The Kichuchu wall rises up almost vertically and there’s no way around it. The trickiest sections are equipped with iron ladders, but we still have to scramble up and over slippery, steep, moss-covered slabs. A slip in the wrong place here would have dire consequences, but unscathed, the team reaches the upper Mubuku Valley and checks-in at the Guy Yeoman Hut on the banks of the Mubuku River. 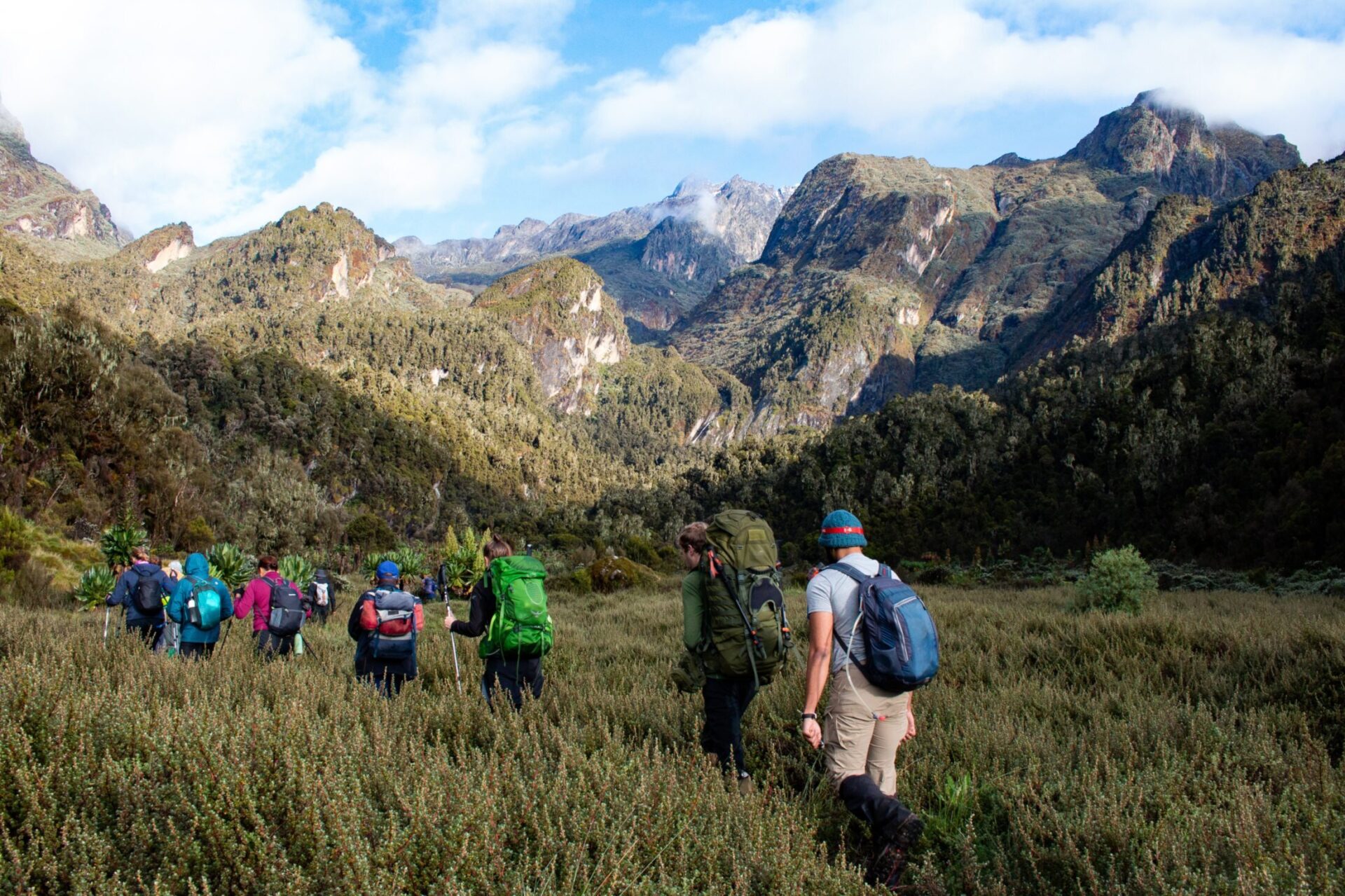 The following day we wake up with the sun seeping through the cracks of the wooden hut. After the dreary conditions yesterday, we’re excited to see what our surroundings actually look like. The views do not disappoint. The location of the hut is the only alien feature in an ocean of greenery with granite towers of over 4500 metres dominating the skyline. Today we’re walking through a wide valley that leads to the Freshfields Pass which forms the watershed between DR Congo and Uganda. Another strenuous, long day with more bog and wet slabs.

This is the route that the famous 1906 expedition followed, led by the Duke of Abruzzi. It’s hard to imagine how these pioneers found their way through this uncharted territory, hacking their way through the thick jungle. They managed to climb all major Rwenzori peaks including Margherita Peak, an incredible feat considering there was hardly any knowledge about these mountains. We pass the Bujongolo Cave, an impressive overhanging rock that served as a basecamp for the Duke’s first ascents.

The final approach to the pass runs through open moorland with the green stacks of the Giant Lobelia’s poking out of the bog. On our right, the black rocky spine of Mount Baker, named after explorer Samuel Baker and the third highest mountain in the range. Our goal for the day, the hut at Kitandara Lake, is only a few hundred metres as the crow flies. Vertically, it’s about the same, testament to the ultra-steep terrain. And steep it is. Again, we find ourselves on smooth, wet slabs, only now we’re down-climbing them. The local guiding team from Rwenzori Mountaineering Services is on the ball and they get the team safely through the crux section of this expedition. 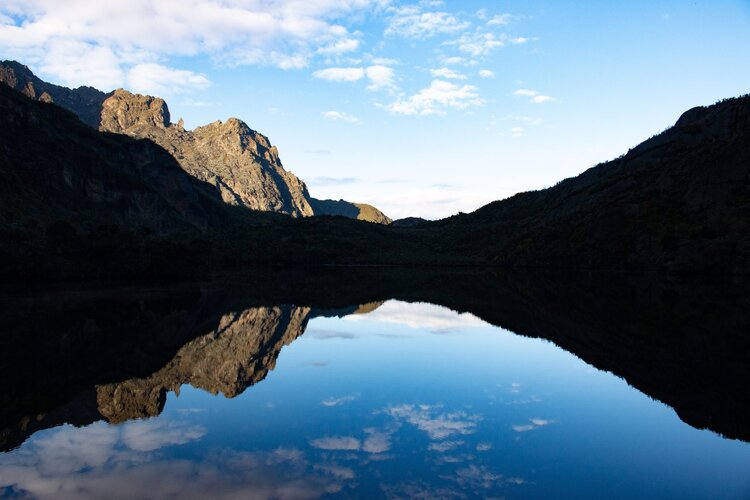 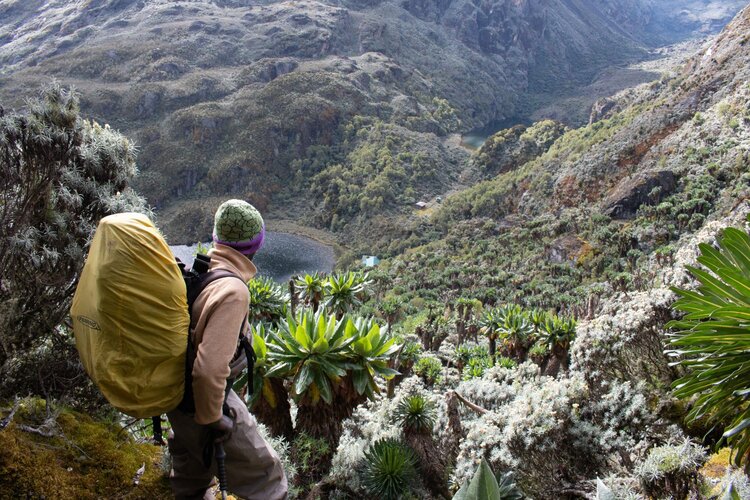 The Kitandara Hut is right on the shore of the lake and must be one of the most spectacular mountain hut locations in Africa. Some of the team members use the extra day at Kitandara to recharge after the brutal past couple of days while a handful attempt the climb up the 4620m high Weissmann Peak, a stunning chunk of rock soaring high above the Rwenzori moorlands with views deep into the Congolese hinterland. The ascent is tough and the last section to the summit is a proper graded scramble. On the top we find the remains of the summit marker, damaged by the hurricane force winds that frequently batter the mountain tops. We are lucky with still conditions and clear views in every direction. Behind the speck on the valley floor that’s Kitandara Lake lies the bulk of Mount Stanley with its last remaining glaciers and multiple craggy summits.

We’re halfway through the trek and it’s clear the expedition is starting to take its toll. Sam, our youngest team member, is feeling sick and struggles to make it up the 4300 metre high Scott Eliott Pass, the highest point of the Central Circuit. Laurence, who joined the Weissmann summit team, has not recovered from the previous day and is completely exhausted. The descent from the pass to the Bujuku Hut is a tricky traverse between the Rwenzori’s highest mountains Stanley and Speke. Sam and Laurence suffer in silence, but are in the capable hands of our fantastic local guides. After six hours of trekking we all gather in the hut behind a steaming bowl of soup. 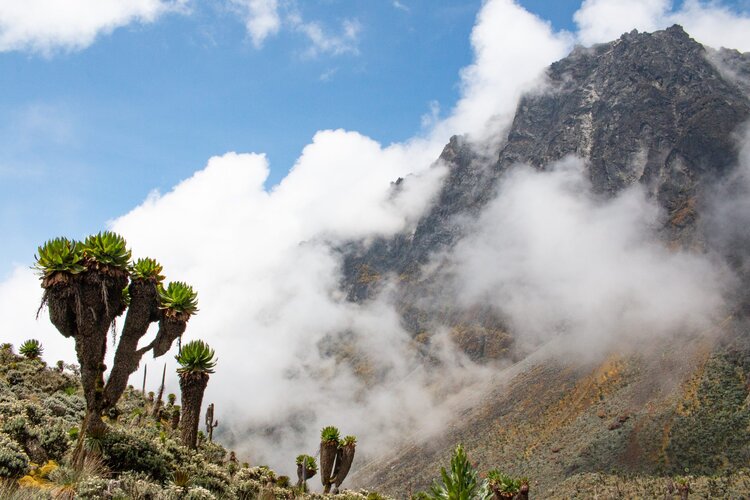 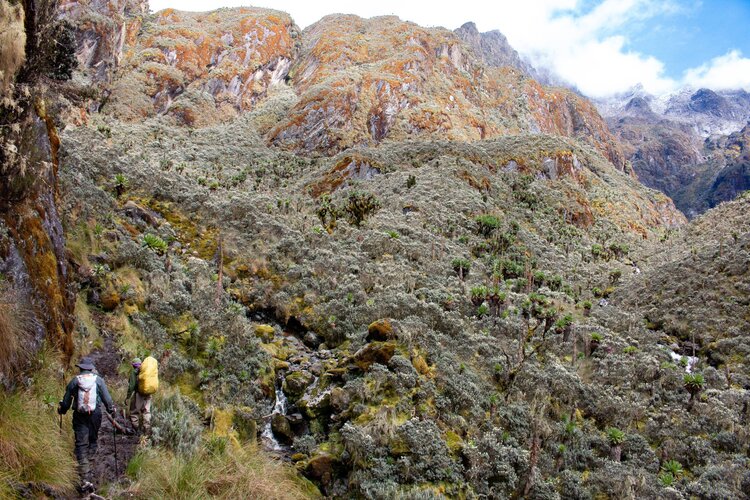 More team members complain about nausea and upset stomachs. Villads, the strongest of the lot, retreats in his sleeping bag feeling flustered. As the night progresses, I hear people vomiting outside the hut and it becomes apparent our expedition is struck by some sort of stomach virus. Luca, my fellow expedition leader and the team medic, is trying to deal with the affected team members all night. By dawn we have 7 people down. How on earth are we going to do today’s marathon descent? We’ve got more than 1500 metres ahead of us.

After some debate, we decide to go for it. It is of course easier to recover at a lower altitude, the toughest parts of the trek are covered by board walks and there are a number of huts along the route should someone become too ill to proceed. Besides, this is character building, right?

The thicker air and perhaps the stunning scenery have a healing affect on the sick-bay and before noon the team reaches the iconic John Maate Hut, built in the early 1990s. We’re following the course of the wild Bujuku River and continue to descend through the Heather Rapanea and Bamboo Zones before crossing the bridge at the confluence with the Mubuku River. A quick ascent takes us up the ridge to the familiar grounds of the Nyabitaba Hut. All of us feel relief and reward, having crossed one of the wildest mountain ranges on the planet. 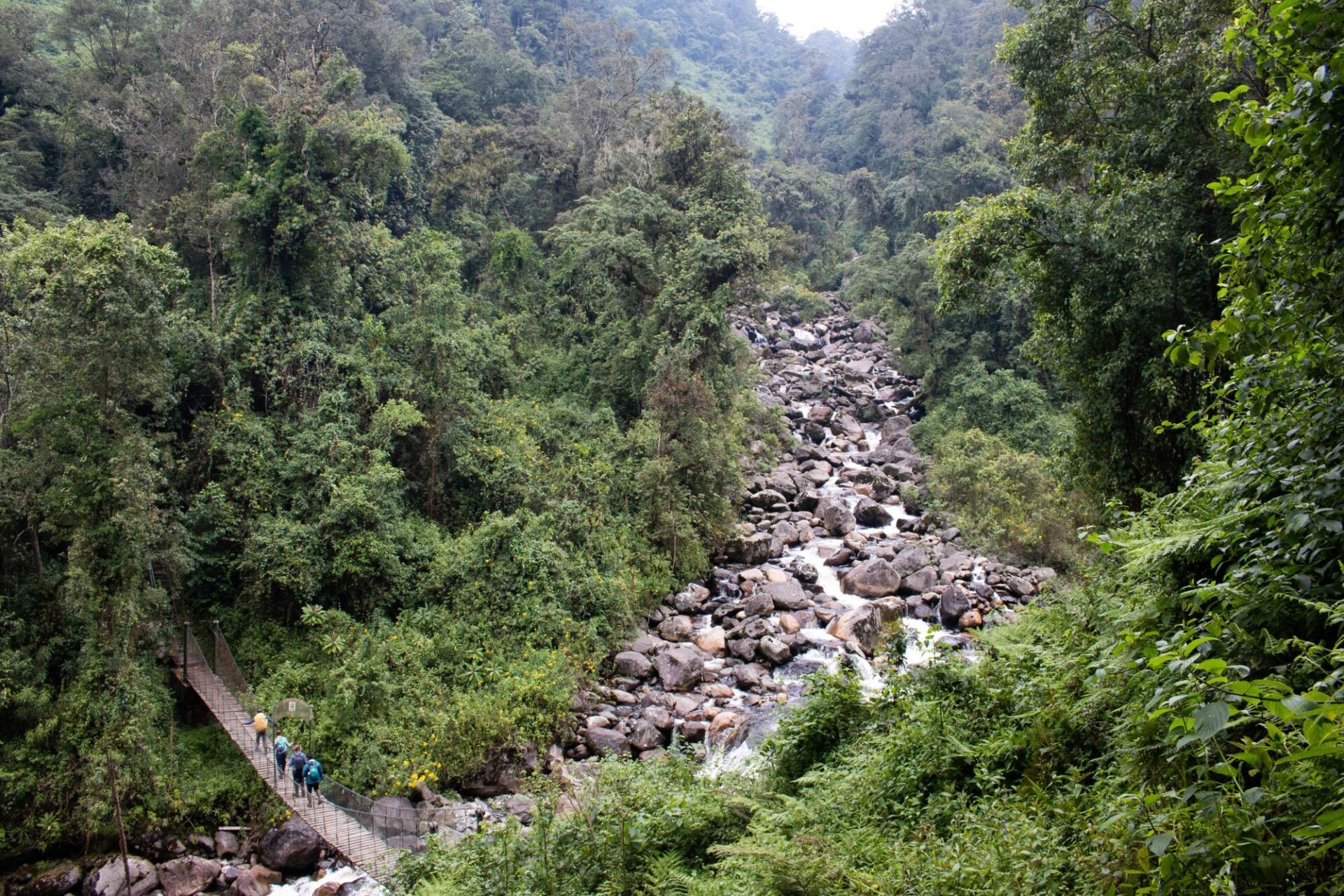 With around 1,000 trekkers per year, the Rwenzoris are overshadowed by famous African trekking destinations like Kilimanjaro, which attracts over 50,000 visitors a year. For those seeking a challenging and uncrowded alternative, the unrivalled Rwenzori treks may just be the right thing for you.

This expedition was organised by Secret Compass and also includes a visit to Virunga National Park in DR Congo. Interested in joining next year’s team? Click here for full details of the 2021 expedition. 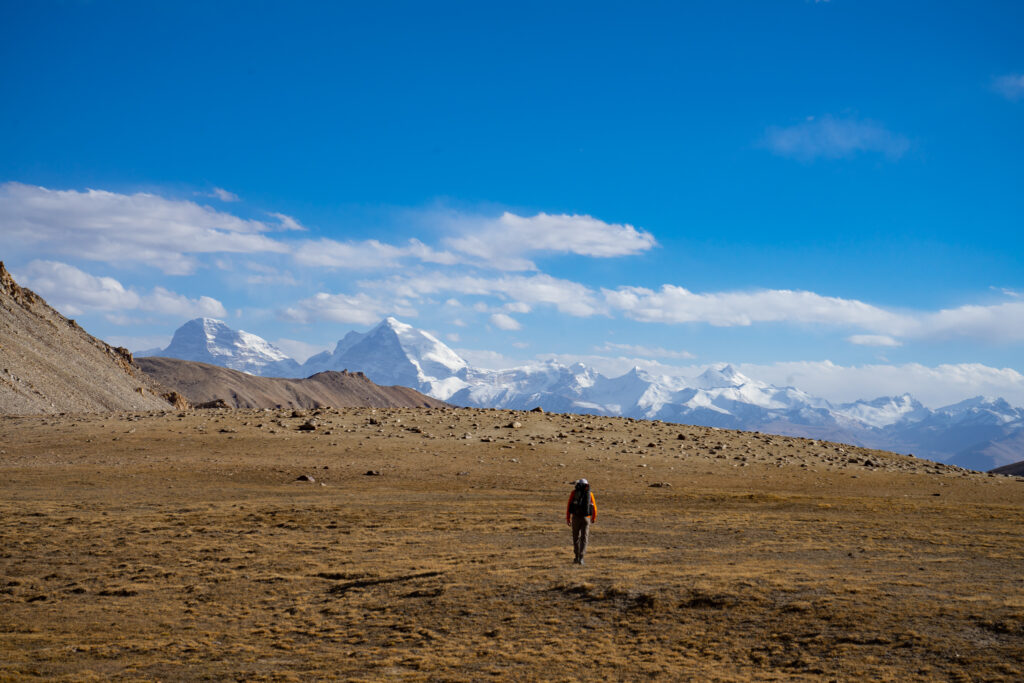 Connecting The Dots of The Pamir Trail 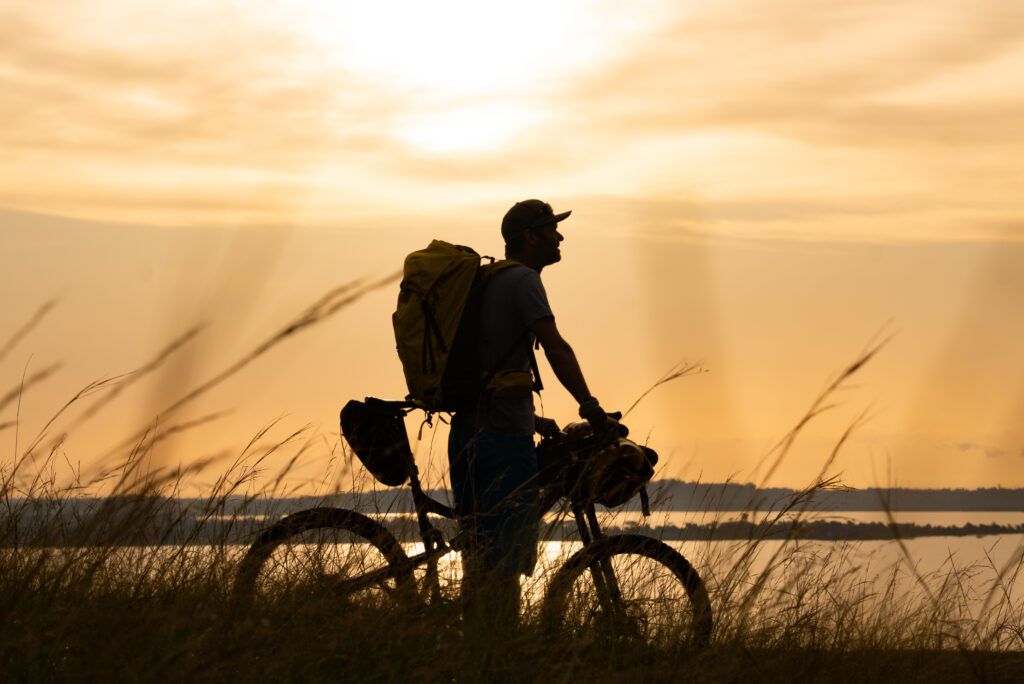 Bikerafting the wetlands of Mabamba Bay 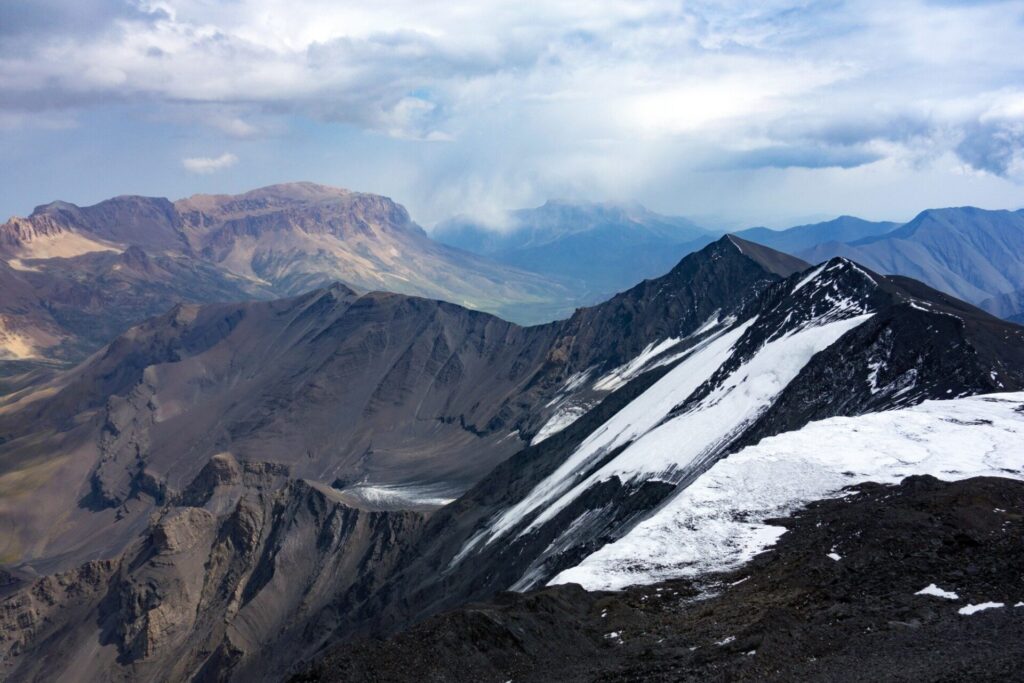 Exploratory climbing on the roof of Azerbaijan 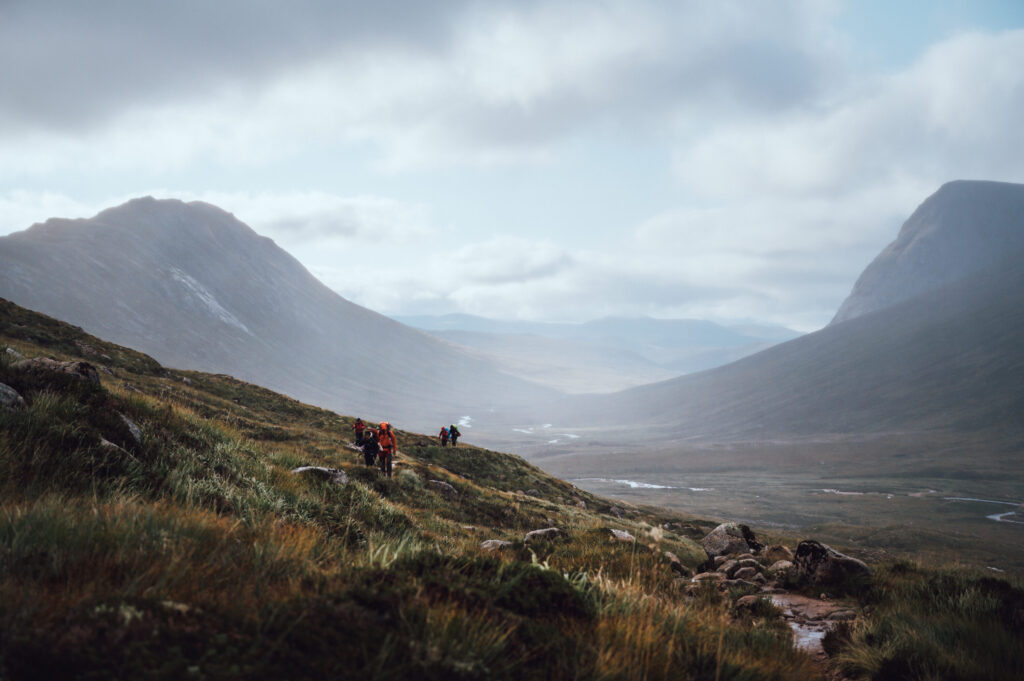 A three-day hike of the Lairig Ghru, the dividing valley of the Cairngorms 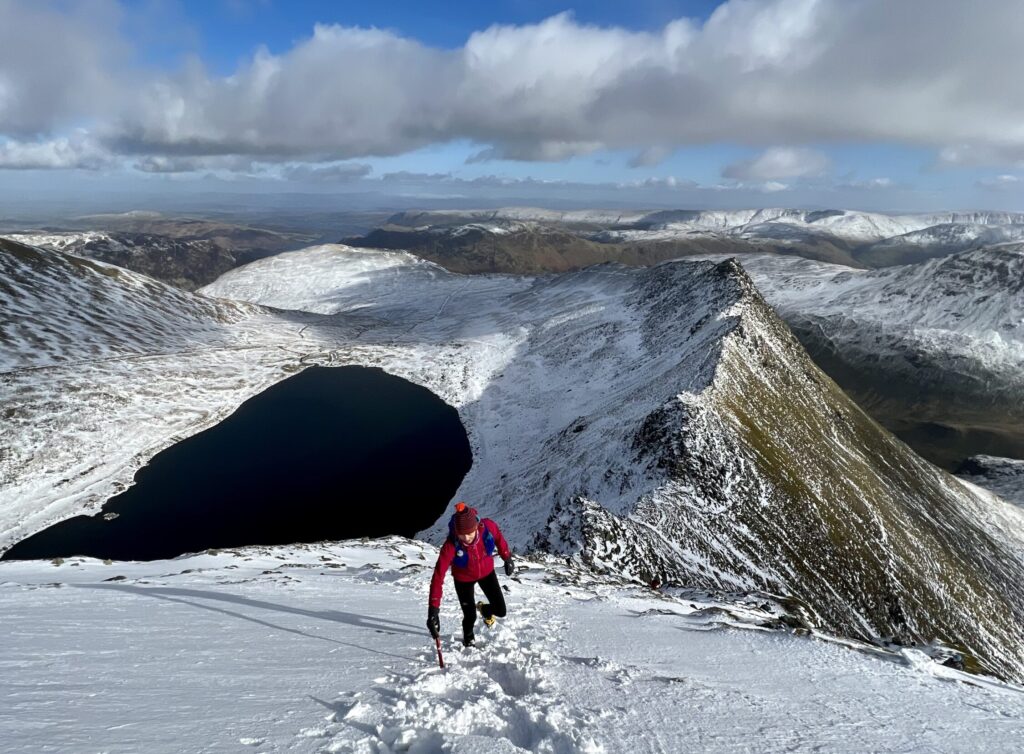 In Favour of Ticklists

A subjective argument for hill and mountain route guides and indexes

Connecting The Dots of The Pamir Trail