Packrafting the length of Bangladesh 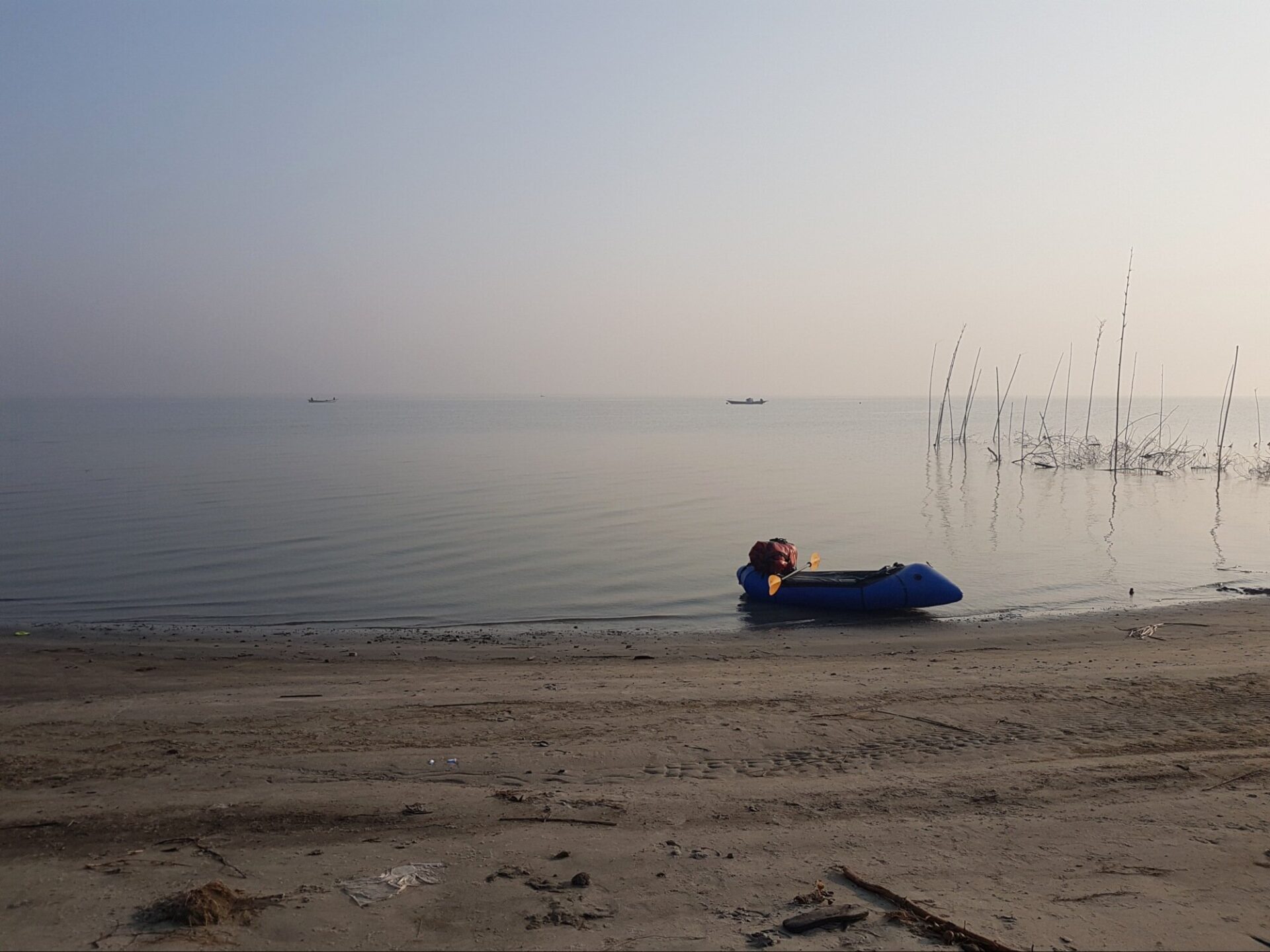 Russ and I had planned for numerous eventualities when we set out to packraft the length of Bangladesh. Now though, stood on a sand bank of the heavily braided Brahmaputra river, we faced a challenge neither of us had prepared for: Russ’s raft had ripped. Not a little bit, the sort that could be fixed with our repair kit, but a half metre tear down one entire side.

A fisherman on his boat had been observing us, our actions a welcome distraction from his catch. His staring made sense; it’s not every day in rural Bangladesh you see an English girl and a Bangladeshi guy, along with two plastic dinghies. He brought his boat over, and after a short conversation in Bangla, gestured for us to get on board.  ‘He can take us back to Gaibandha ghat’, Russ muttered, clearly disappointed.

Only that morning we had set off from Gaibandha, a small bustling city a few kilometres inland from the Brahmaputra’s banks. We’d taken the previous day off, to rest and recuperate, after our first full week into a month-long journey. Yet now, hours later, we were both silent, absorbed in our thoughts as we sped past waters just paddled. It was obvious that Russ couldn’t continue, but would it be wise to carry on alone?

For the last seven days, Russ’ charisma and fluent Bangla had formed the basis of where to stop, eat and sleep. We knew each other well, having met when we both lived in Manchester. Since then, after fifteen years in the UK, Russ had returned to Bangladesh and in 2017, we cycled from Dhaka to the Indian border together. Part of the journey had involved taking our bikes across the Brahmaputra by boat. It was then that the idea formed. ‘Wouldn’t it be cool to come back and packraft these rivers?’ I don’t know many people who would respond with such enthusiasm, but from that moment on, Russ was in. Now though, our current situation meant that Russ was out. 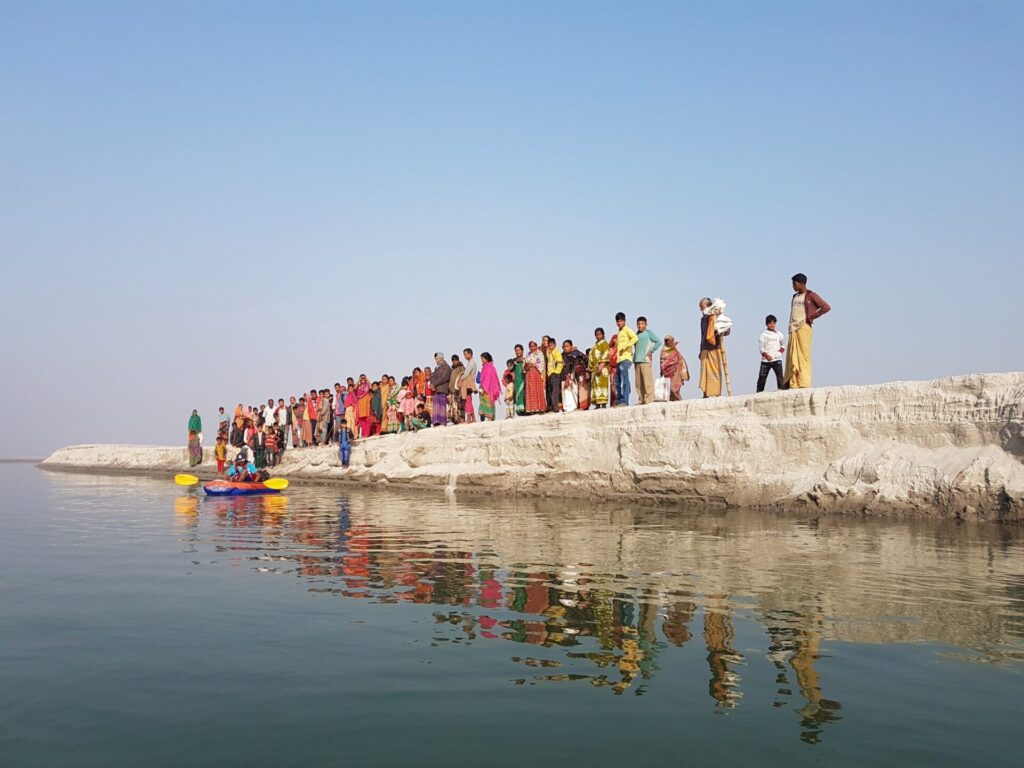 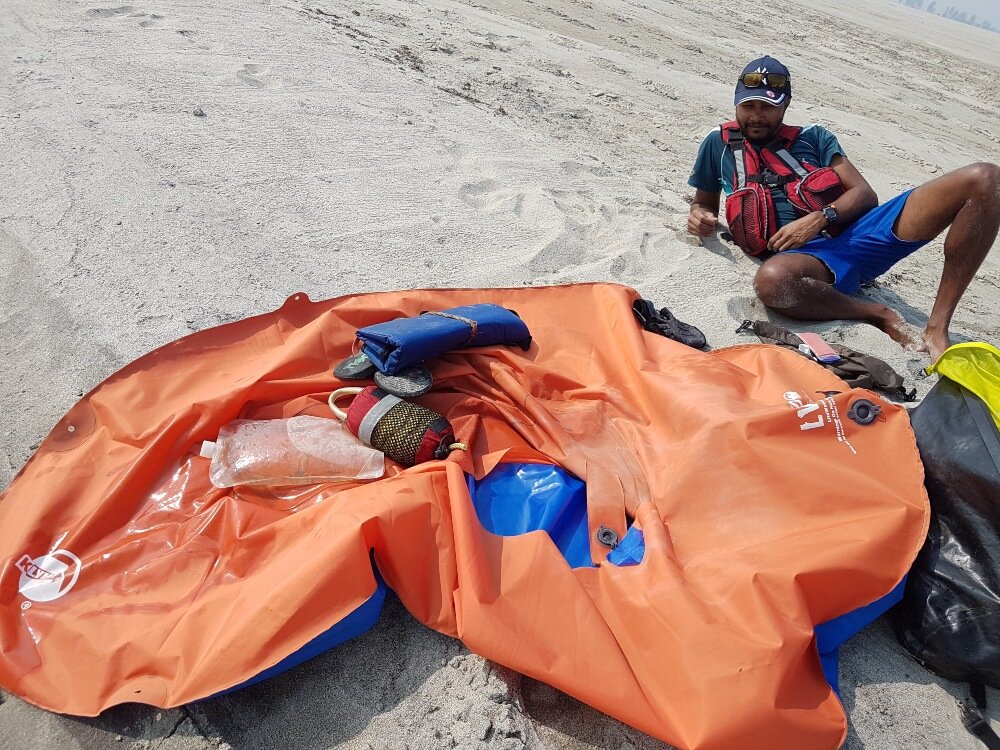 For the first time since stepping foot in the country, I couldn’t see another human being. It was both incredible and terrifying.

The next morning came around, accompanied by a heightened sense of vulnerability after a restless night’s sleep. I had decided to continue, but thoughts regarding previous reliance on Russ weighed heavily in my mind. Arriving back at the ghat – a launching place for boats – the time for quiet contemplation soon disappeared, replaced by the unlikely appearance of a TV crew. Bizarrely, they were here for us.

Surrounded by an ever-growing crowd, a private goodbye with Russ was off the cards. A cameraman followed for the first ten minutes on the water, and then that was it. I was alone. For the first time since stepping foot in the country, I couldn’t see another human being. It was both incredible and terrifying, the water glistened in the early morning sun, and each paddle stroke served as a reminder to the amount of flat water between here and the Bay of Bengal. I made myself a deal, follow the Brahmaputra to where it meets the Padma, about a week away, and re-evaluate from there. It was going to be ok, all I had to do was paddle, eat, sleep, and repeat.

By nightfall, the anxiety had returned. I wanted to camp somewhere I wouldn’t be seen. Not easy in a country where 90% of land is less than 10 metres above sea level and the population density is four times that of the UK. The sheer flatness was quite extraordinary and, in some places, you could see a person from 400 metres away. I got out my phone and brought up google satellite images, on the hunt for any seemingly uninhabited space. A large sand island wasn’t far away: decision made. I’d sleep there.

Pulling up onto the sandy embankment and glancing around, I hoped that no one had seen me. There didn’t appear to be any boats, so leaving the packraft on the shore, I hopped up onto the banks to scout it out. Just sand in every direction, no buildings or even footprints. A good sign. In Bangladesh you’re never alone for long though, and waiting back at the raft was a small fishing boat with three young men inside. For a moment we stared at each other, none of us sure what to do next. Then, taking the reins, one got out and wandered towards me. Time to try the magic letter.

Before we had gone our separate ways, Russ had translated a letter containing a brief explanation of what I was doing and some useful sentences. Cautiously, I handed it over to the fisherman, and, keen to take note of any reaction, I watched as he read. A warm smile broke across his face, signalling I could relax, as he beckoned his mates over. Feeling more confident, I turned to google translate ‘Please, don’t tell anyone I’m here.’ They got the message, and after lots of thumbs up and overdramatised waves, headed back to the river. A faint call to prayer rang out in the distance, reassurance that the nearest settlement was quite far away, and an indication of a peaceful night ahead.

The next day consisted of a lot of flat-water paddling, to the point that it reached a rhythmic, almost meditative state. When planning the trip, it had seemed a good idea to go in winter, avoiding monsoon season. Now though, a little flow would have been nice. Much of the river looked the same: mud and sand banks half a metre high, interspersed by farms, villages, and chars (settled islands of sand). All of which added to the overall theme of cyclic repetition. It wasn’t long before I needed new ways to entertain myself: boat karaoke was born. Titles included ‘I Want to Know What Flow Is’, ‘Flow Is All Around Me’ and ‘Here Comes the Flow’. 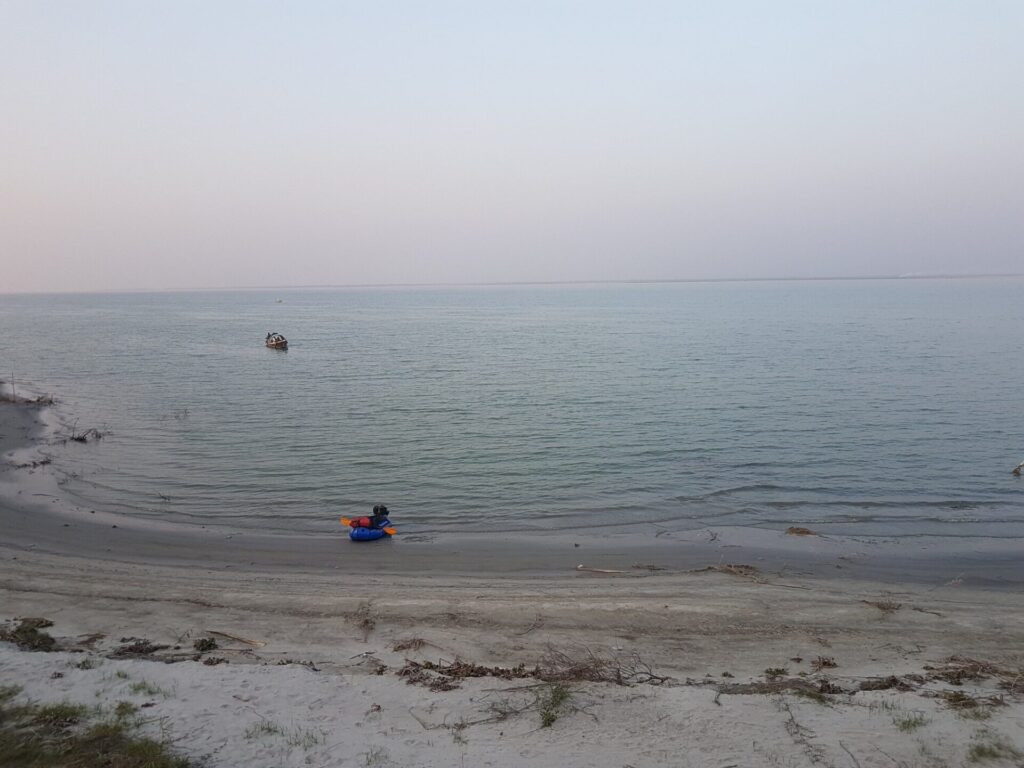 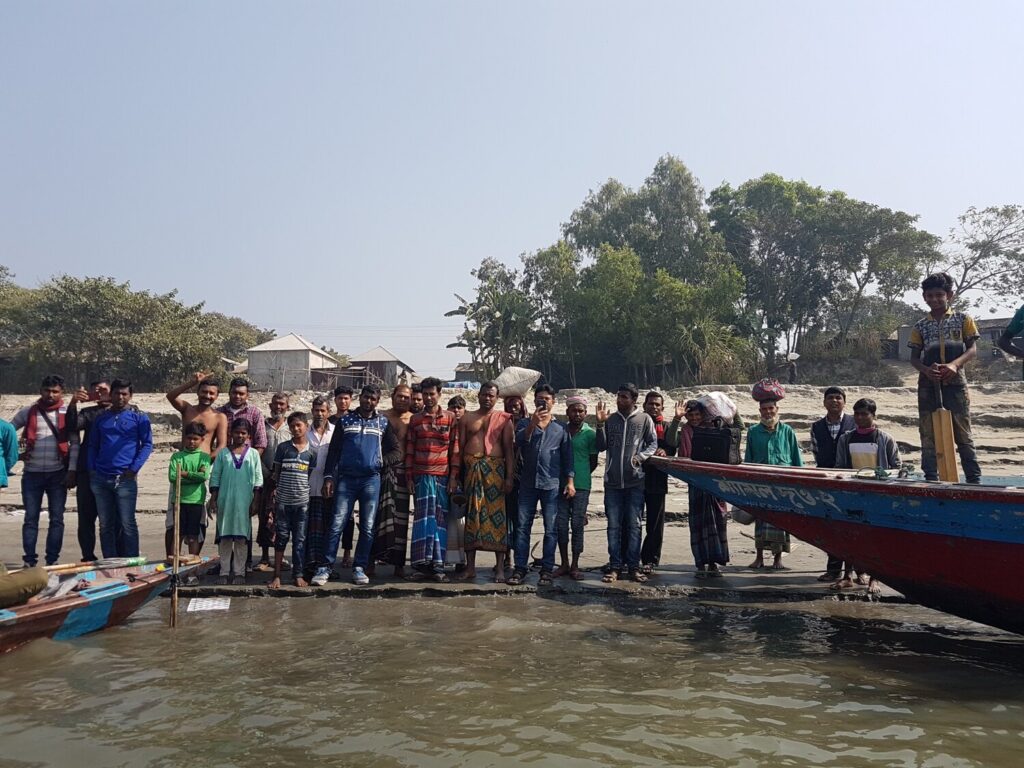 After a third rendition of ‘(I Can’t Get No) Flowing Action’, it became clear that I was in need of an evening with some human company.  Some children waved as I passed the village of Manik Potal. Encouraged by their smiles, I dragged my boat up the steep mud banks.  Such actions didn’t go unnoticed, and soon a large crowd had gathered, all in search of an explanation for this odd arrival.  A man enthusiastically bound forward, ‘I speak some English, you can stay with me and my family, come!’

His name was Russel (must be a popular name in Bangladesh), and he had learnt English working in Bahrain. His excitement for hosting was palpable as he animatedly showed me round the complex that he and his fifteen-plus family members called home. It consisted of a yard, surrounded by four corrugated metal buildings, with an open-air bathroom and water pump in the corner. After chai and introductions, he asked if I needed anything, including ‘My wife can wash you, if you want’.

As much as I believe there is a first time for everything, I declined the offer, explaining that I was content to wash myself. Russel demonstrated how the water pump worked, and after pulling a metal sheet across the opening, I began to scrub. During the cleansing process the noise in the yard increased considerably, suggesting Russel was no longer alone. ‘Hurry up!’ he shouted, ‘I can’t hold them back much longer!’ Afraid of being exposed to half the village, I quickly threw on clothes and emerged, slightly flustered to see thirty people keenly awaiting my presence.

The food that night was incredible: fish curry, fried bitter melon, paratha and rice. Entertainment for the evening was watching me eat with my hands, each mouthful the subject of eager advice and praise. I didn’t particularly enjoy the concentrated attention on my eating habits, but accepted it as part and parcel of the experience. Now, feeling full and satisfied, the fatigue from the past few days kicked in, and sensing this, Russel kindly showed me to a bedroom where I could sleep.

Around midnight, I was disturbed by whispers followed by a flashlight in my face. I decided to ignore it, feigning sleep until the sound of footsteps receded. Not much later, the same thing happened again. This time I tried a different tact, a bit of gentle movement to hint I’d woken up. I had no idea how many people were in the room but, as I lay underneath the mosquito net draped over the bed, I felt a bit like an animal in a zoo. Then came the third time. Not knowing how much longer this was going to continue, I searched for Russel, ‘What’s happening?’ I whispered, lifting up the net. ‘Oh, they didn’t get to see you earlier, so they’re just having a look’ he explained. Thankfully, there was no fourth interruption.

Morning came around, filled with thank yous, photos, and breakfast chapatis, after which we made our way down to the river. Word had clearly got out that I was leaving, as there was already a huge crowd waiting. Back in the water, I turned to view the village one last time, waving goodbye to what appeared to be the entire population of Manik Potal assembled on the banks. It had been a surreal experience, a small taste of unexpected fame, leaving me both elated and bewildered. 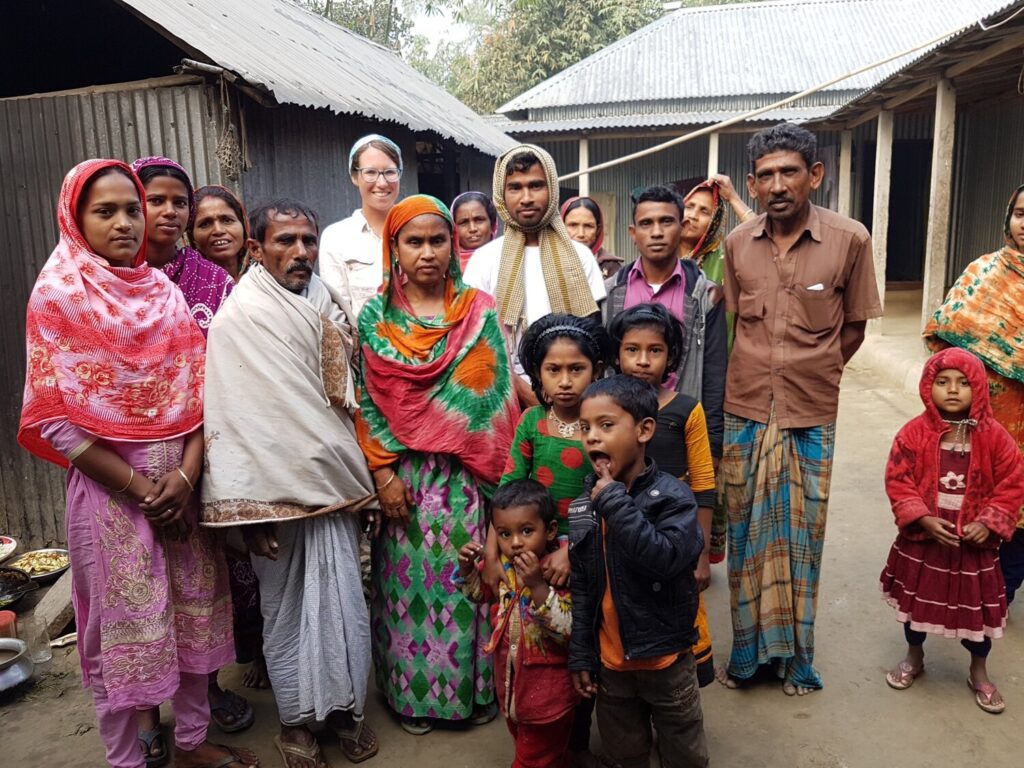 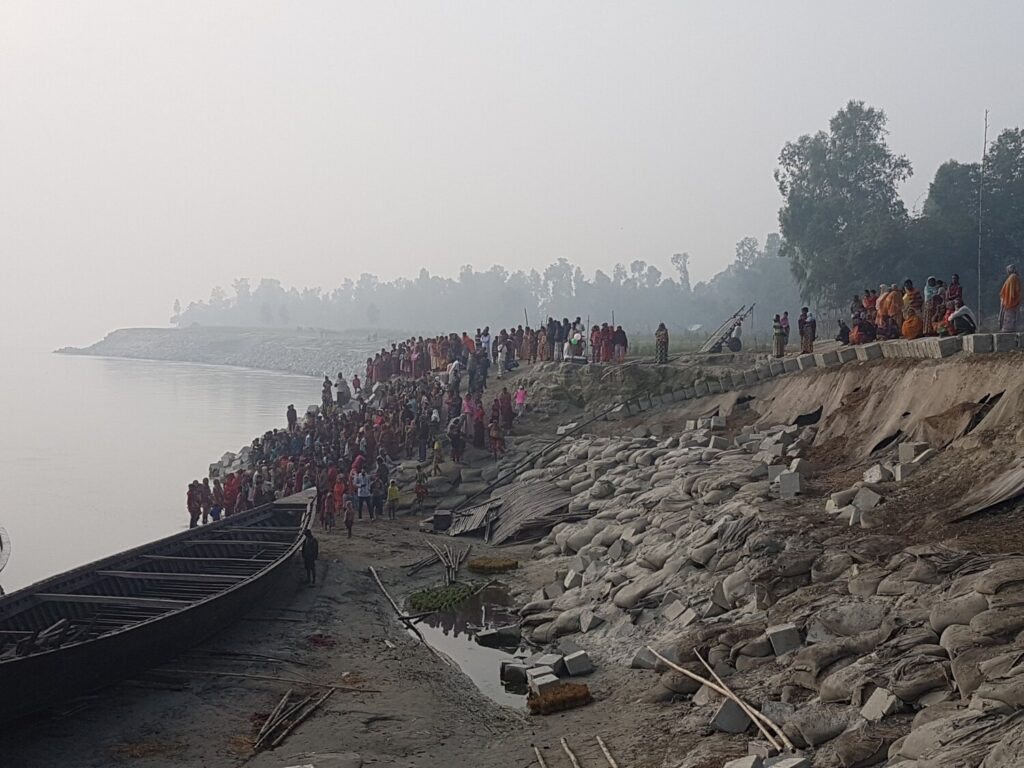 The next few days passed without incident, the river remained unchanged and the villages were as inquisitive as ever. A couple of times I was joined by endangered Ganges river dolphins, frolicking in the calm waters, seemingly oblivious to my company. They were quite big, almost human size, and at times came so close I considered they might tip the packraft! Incredible really, that such remarkable wild animals could exist in a country so intensely linked to its waterways.

One constant of the journey, was the sharp contrast between the quiet introspection of days on the river and evenings spent as centre of attention. It was a strange rollercoaster of emotions to be frequently swinging from alone to surrounded, and in the days following Manik Potal I chose to try to sleep in more isolated/private places. This led to some interesting encounters; one evening was spent camped outside a farmer’s house and another, after arriving rather bedraggled at the local constabulary, the police put me up.

Finally, I reached the confluence of the Brahmaputra and Padma. The Padma being an adopted name for the main channel of the Ganges, which travels south east from India, through Bangladesh towards the Bay of Bengal. The convergence signified a change, from self-sufficient fishing villages to heavier river traffic, en route to and from Dhaka. I couldn’t quite believe I’d made it. The deal from earlier in the week was now sealed, replaced by memories of faces, paddle strokes and heightened sensations. One thing was certain, I needed a rest day, partly to heal the seven angry blisters on my left palm and partly to process and plan the next section of the journey.

I had no idea of the what the next few weeks would hold; that a couple of weeks later I’d be forced to give up three days before reaching the ocean. Yet, regardless of the end goal, I could be sure that the memories of people and paddling would be enough to last a lifetime. 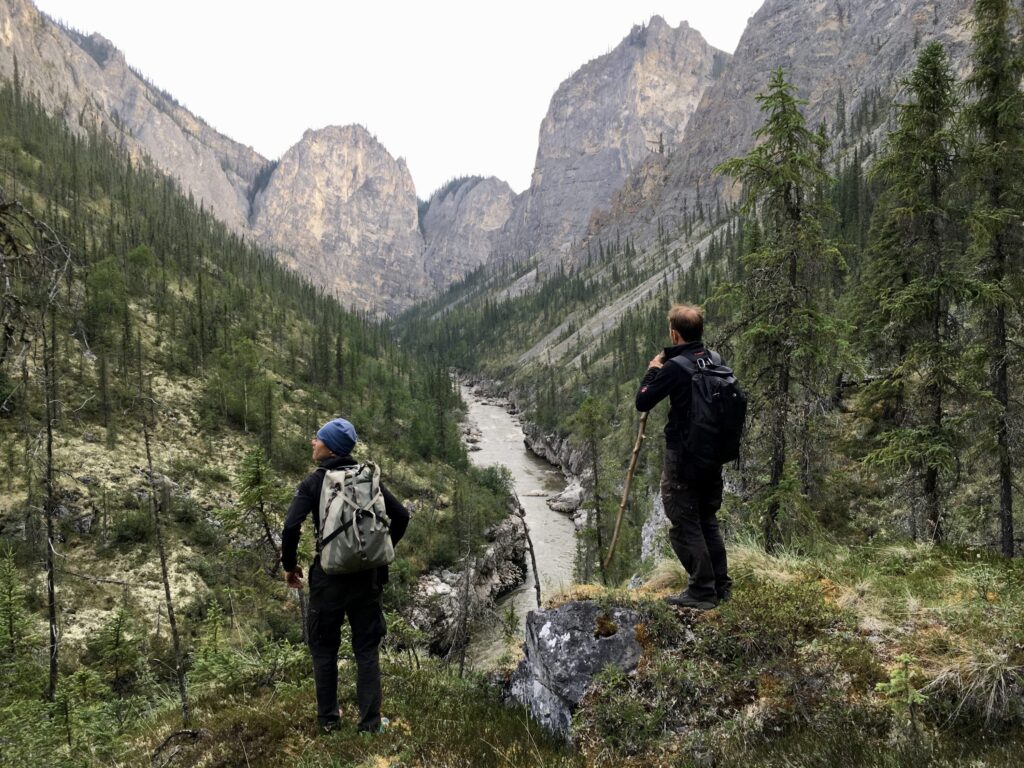 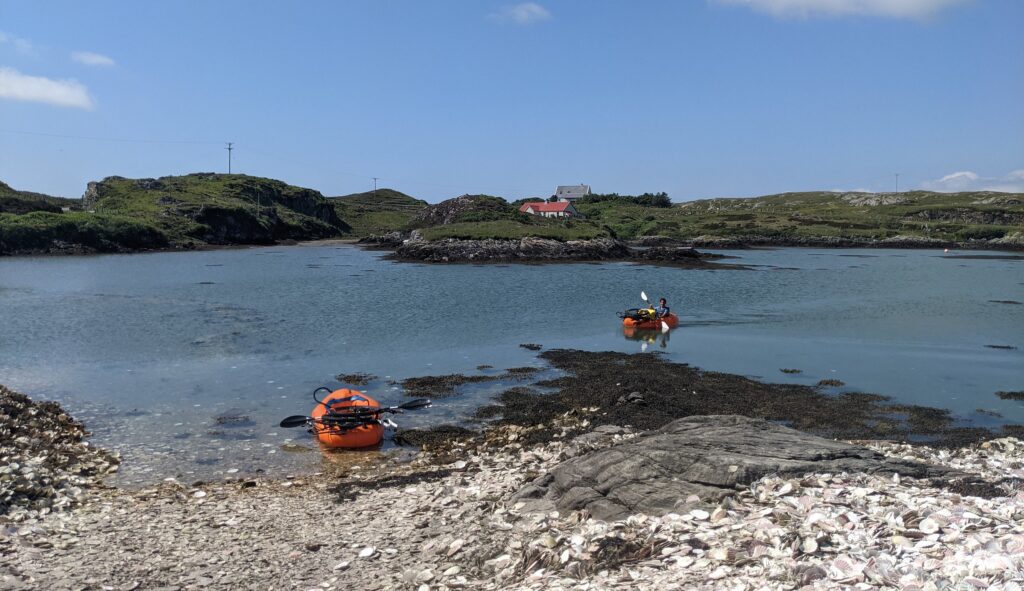 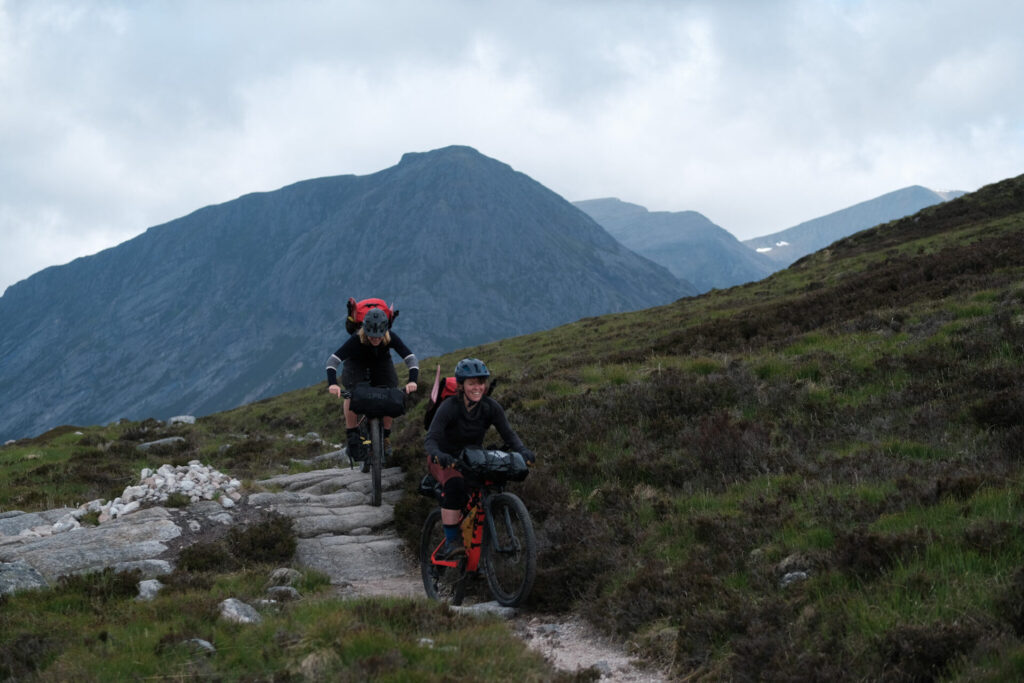 The Power of Slow Adventure