Home Story A Foray into Via Ferrata

A Foray into Via Ferrata

Take a walk along the iron path

Originally designed to connect villages to high pastures, rudimental protected paths involving carved footholds, hand hooks and iron pins ladders have existed in the Alps for centuries. During World War I, vie ferrate — ‘iron paths’ in Italian — were constructed across the Dolomites to enable soldiers and equipment access to strategic positions. Local Alpine clubs then adopted the routes, equipping them with steel cables and iron bars to make them more accessible. Today, many of those same vie ferrate are major tourism attractions, maintained by local communes and volunteers.

In the spring of 2022, having clipped into their first via ferrata route while travelling around Andorra, Kirsty McDonald and Johny Cook found themselves hooked. This is the story of their introduction and progression along the iron path. 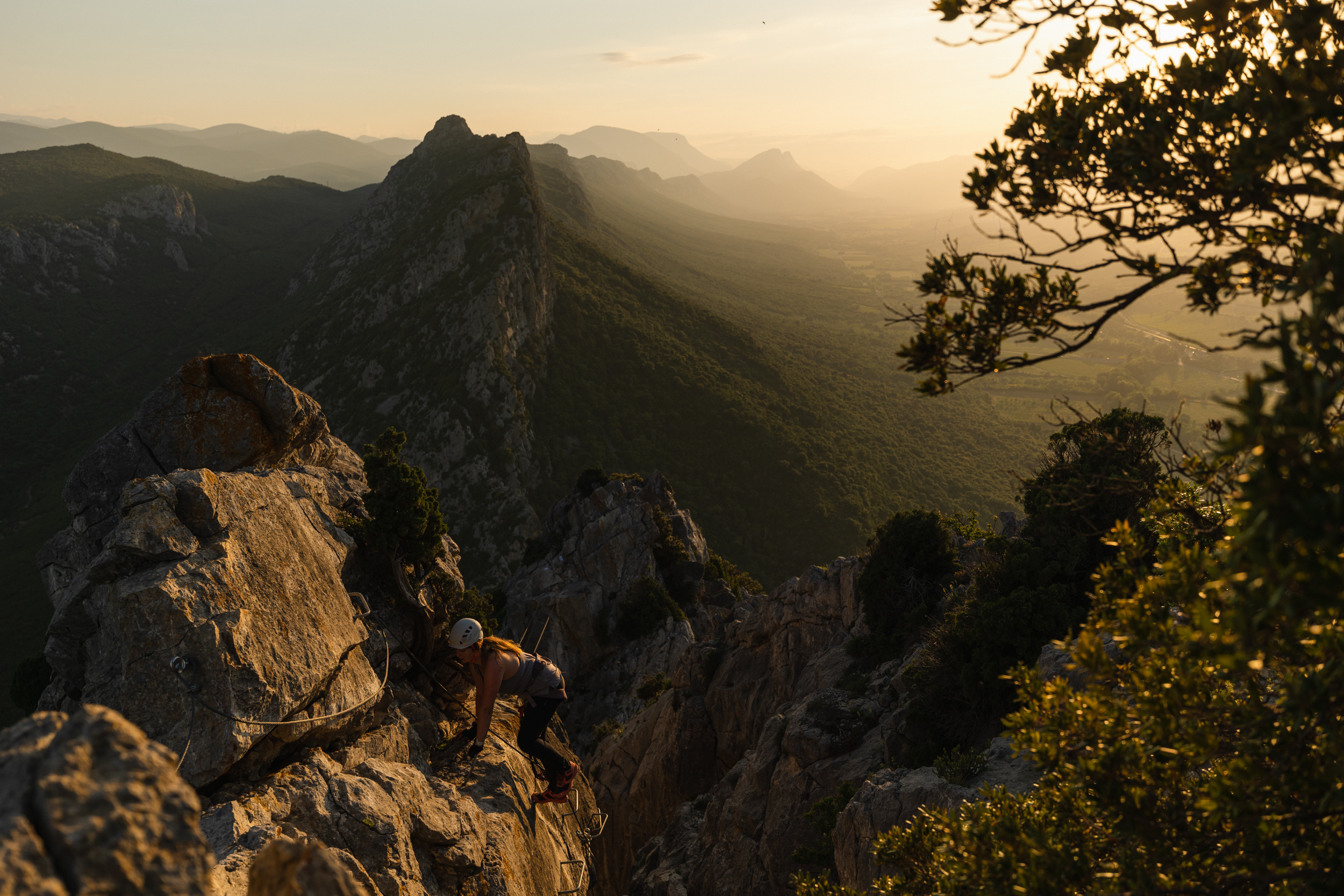 ‘Of course this is how we spend our Saturday evening,’ shouts Johny beneath me, as I try not to have a complete meltdown. With my entire bodyweight I cling to a small metal rung overhanging far above the ground below.

This is the Roc Del Quer, a short, punchy via ferrata route 350m above Canillo, Andorra. Here we are, on the most technical and exposed section of the route. I’m not entirely sure how high this part was off the ground, so I’ll just say it was pretty bloody high!

After slowly but successfully traversing across the flat wall face, we now needed to get over this small overhang to continue moving upwards – there was no escape route, and no way I was going to down-climb what we had just come up, so up-and-over was my only option. And looking down was the worst thing I could have done. This was more than enough for my second ever via ferrata experience! 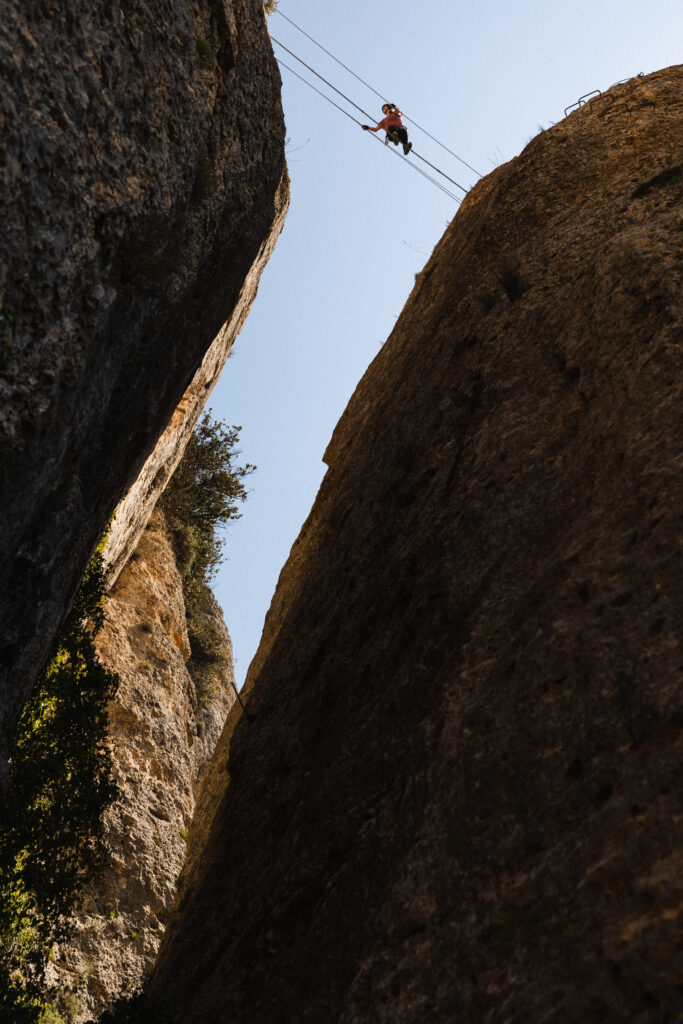 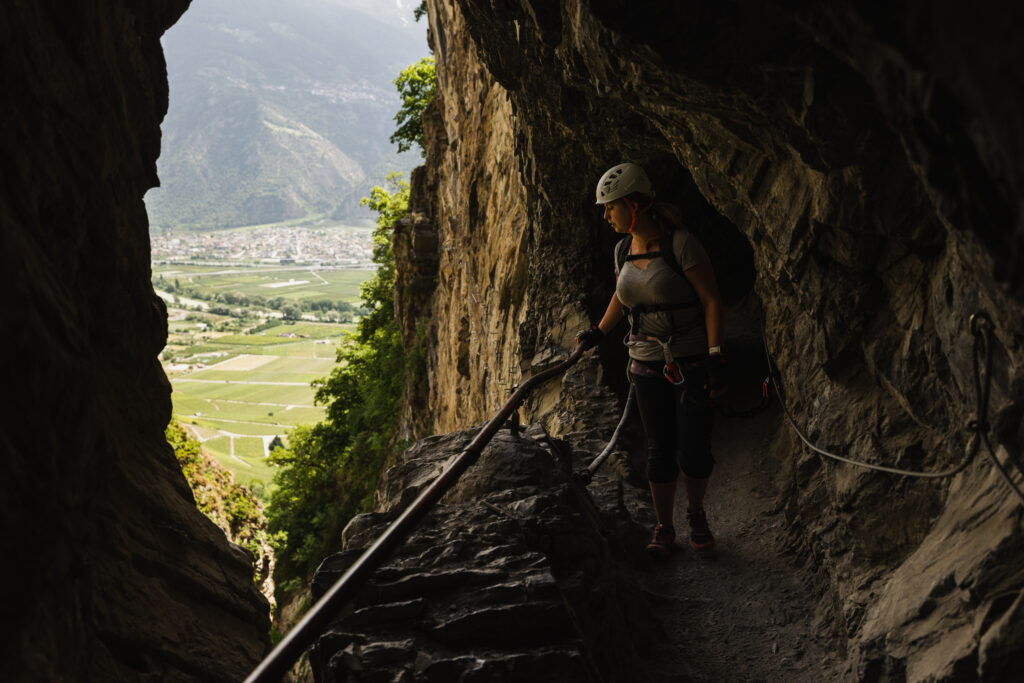 Originating in the Italian Dolomites, via ferratas are now found in a number of other countries including the UK, France, Spain, and Germany to name a few. Essentially the practice of ascending steep routes by a series of metal rungs, chains and ladders fixed to the rock.

Equipment-wise, at a bare minimum you’ll want a safety harness with a duo of lanyards and carabiners that are required to clip into the safety cable. You can buy ‘via ferrata kits’ which have the specific lanyards and Klettersteig carabiners that are needed for via ferrata. A helmet is also essential – not only for the obvious benefit of protecting your head if you fall, but also to protect your head when you inevitably smack it off the overhead rocks (which I have done many a time, not entirely paying attention to how much I need to duck under an overhang).  In the first few routes that Johny and I tackled, I just used my bike helmet…. not ideal so I did invest in a climbing helmet after a couple of routes. And lastly, an optional extra, but I would highly recommend gloves – not only do they protect your paws from being chewed up by the wires, but they also help with grip. 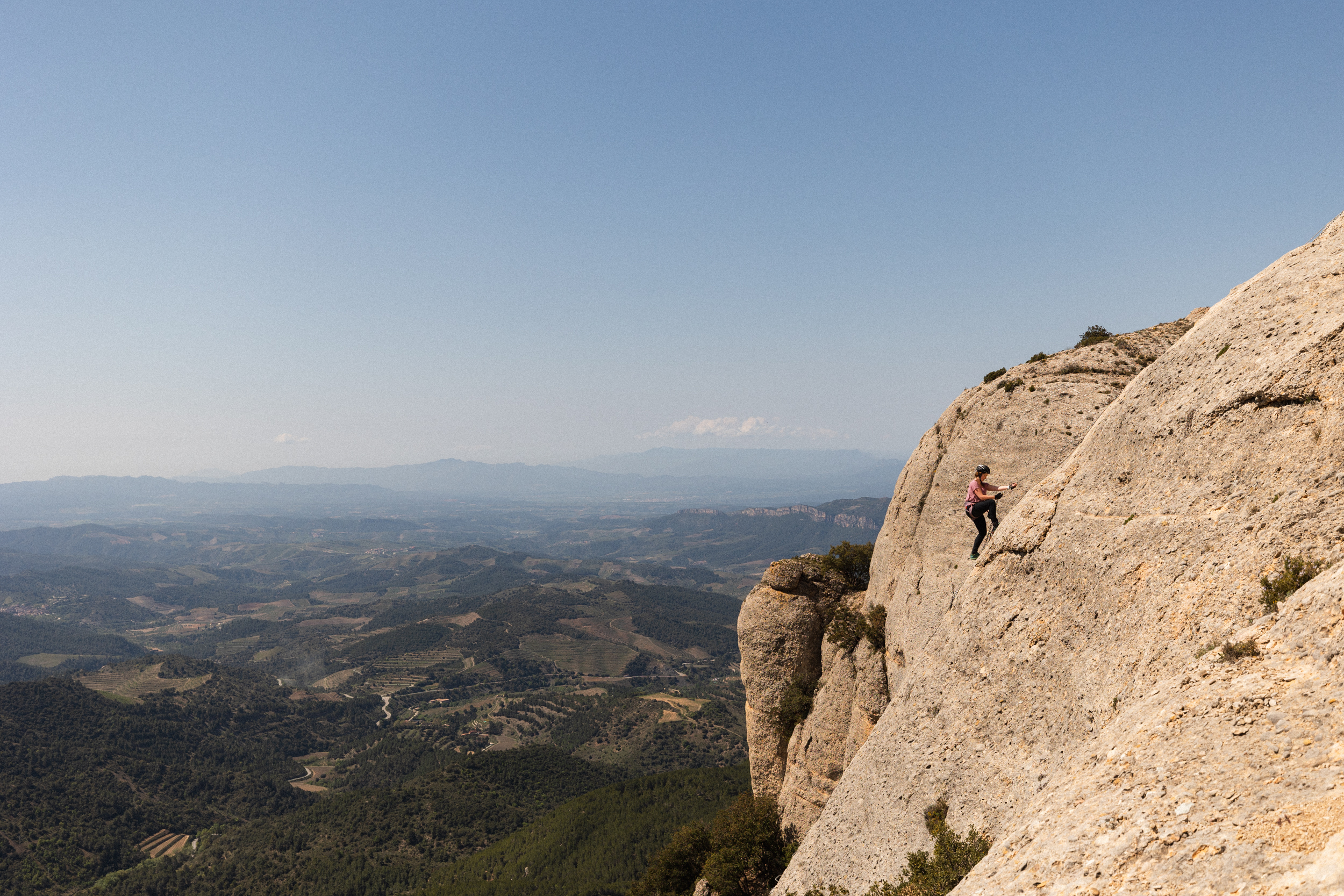 Using the Hüsler scale, routes are graded as K1 – K6, with K1 being the easiest and generally suitable for kids. Easier routes can still be quite steep, but rungs tend to be closer together, and there are less exposed sections. As routes progress through grading K3 and above, these become more exposed, with longer climb sections, more overhangs, and less climbing aids. A common yet daunting feature on many routes are ‘Tibetan bridges’, which consist of one cable for your feet, and one for each of your hands – I don’t think I’ll ever be at ease crossing one of these things… and they are particularly ‘fun’ when a gust of wind hits them and sends you wobbling around!

The first route that we tackled was in Andorra earlier this year, and was graded K2. I have a bit of a fear of heights – I know what you are thinking ‘why on earth would you try this if you are scared of heights?’ but Johny and I had convinced ourselves all would be fine. Standing at the bottom of the first section, I was quite nervous. It wasn’t falling that made me nervous as I knew I was connected to the safety line, but I was more worried that at some point, I would freeze, not be able to move on and inevitably need rescuing. As soon as I started climbing, I knew I absolutely bloody loved it!

My focus was on climbing up the ladders, so I found I wasn’t really paying attention to how high I was. And when we reached a flatter part of the route, I would turn around and dare to look down, surprised at how much height we had gained in a short space of time. As we moved up the rocks, I actually started to really enjoy the height, the view, and the strength that my body was displaying. Getting to the top was an outstanding feeling of achievement, and I couldn’t stop smiling the whole walk back down – so much so that we jumped at the chance to challenge ourselves with our second via ferrata the very next day.

No way I was going to downclimb what we had just come up, so up-and-over was my only option 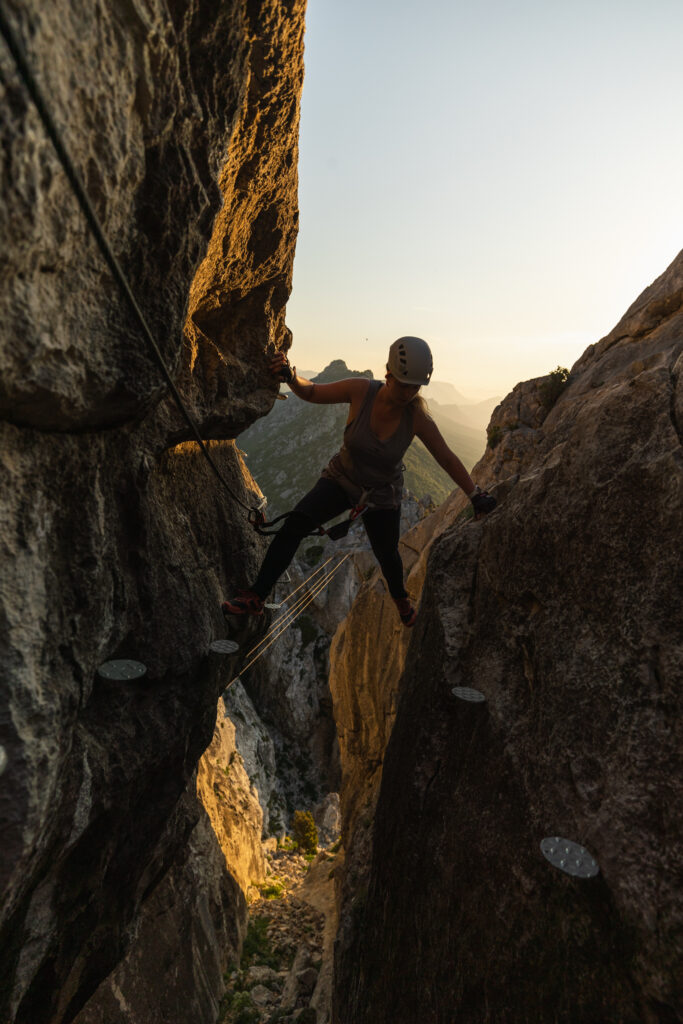 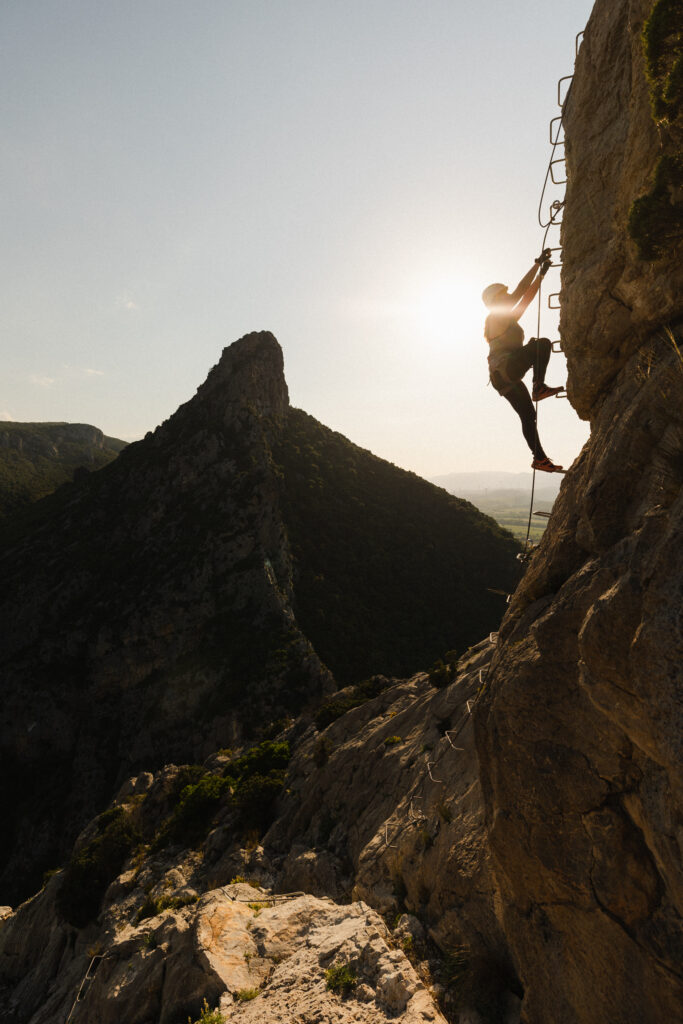 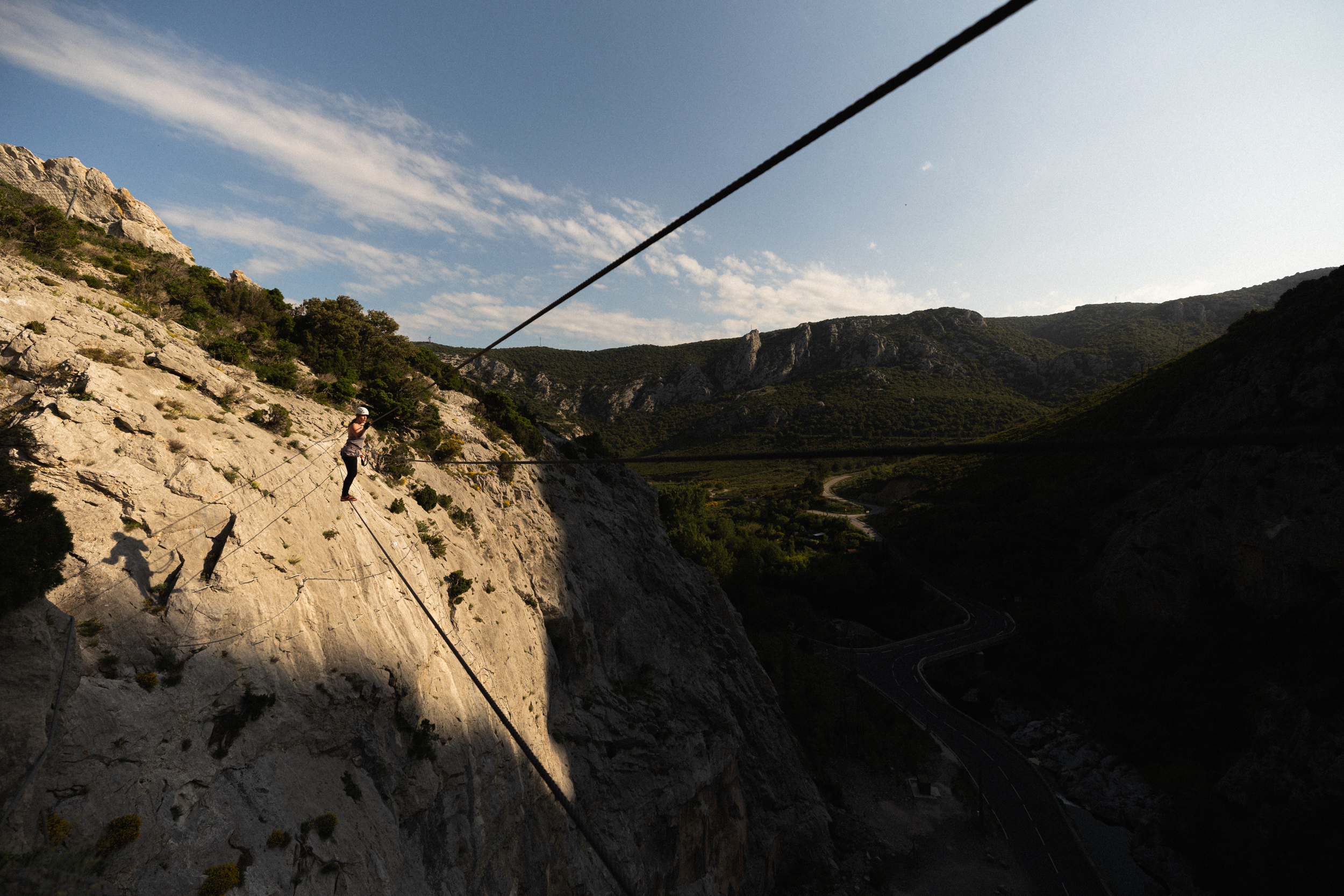 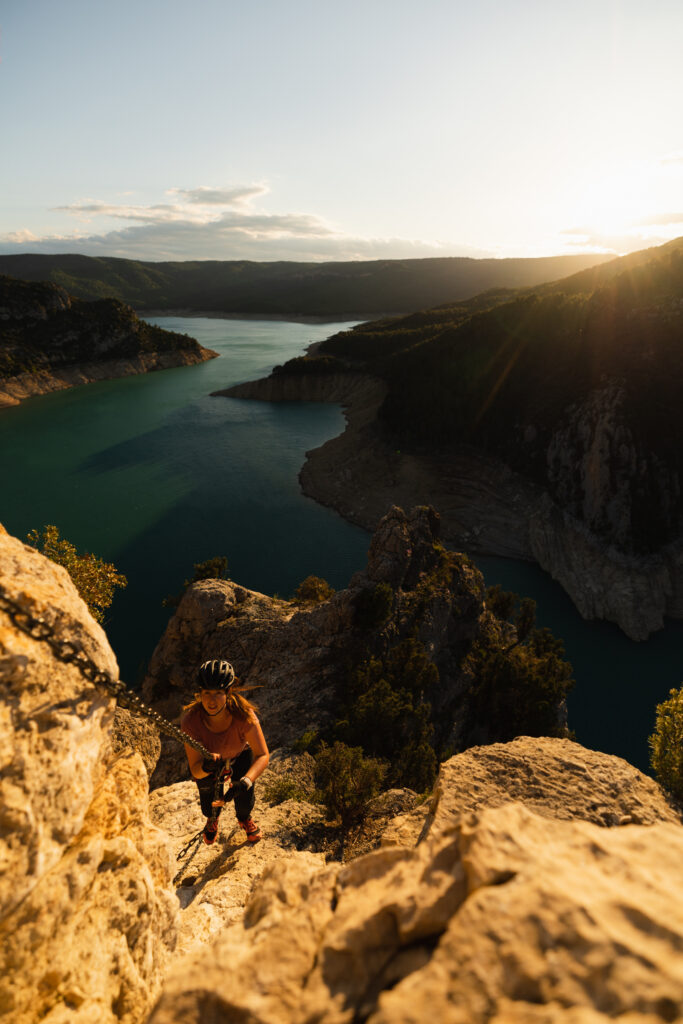 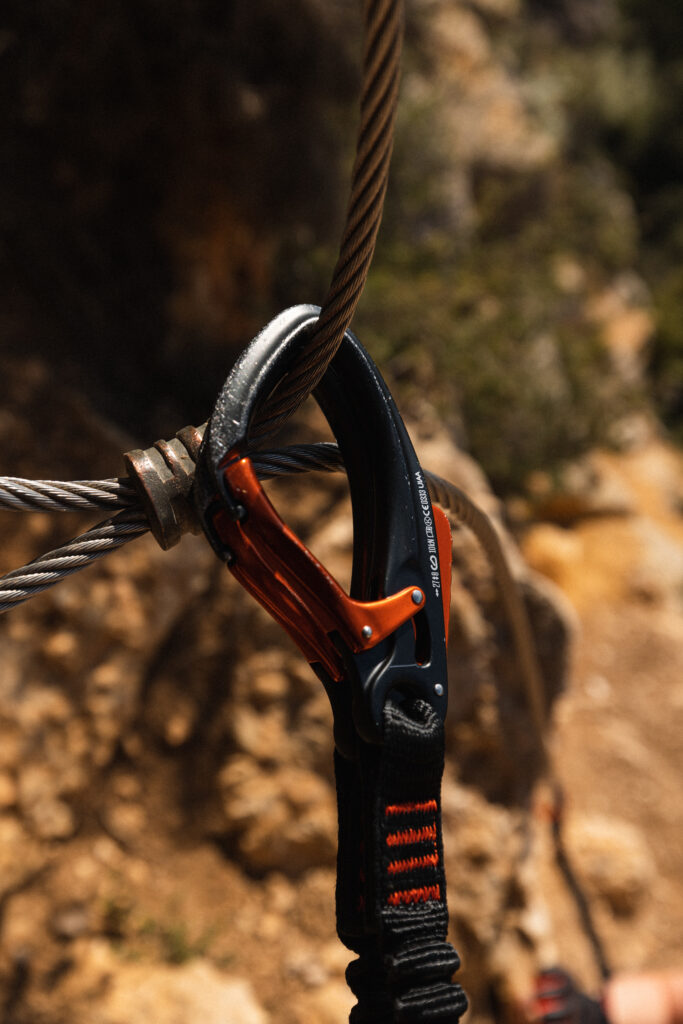 Roc Del Quer was a K3 graded route, and although that flat wall and overhang were quite scary, I got a rush of excitement and pride once I passed that section. And now that we have done a few more routes and my confidence has grown, I would love to go back and try it again one day, and (hopefully) see how I have progressed.

Since those first couple of routes, we have tackled another seven routes throughout Andorra, Spain, France and, most recently, Switzerland. These have been of varying difficulty, although we have stayed away from anything harder than a K4 grade. I have loved them all except one.

Nestled high in the mountains of Encamp in Andorra, this route was supposed to be easy and was labelled as suitable for kids. Unfortunately the higher parts of the route were covered by snow and ice. After negotiating the climb – which was slightly sketchy and in hindsight we probably should have turned back not long after ascending the first few ladders – we found that the exit route was down a steep hill which was completely covered in snow, to the point we couldn’t go down that path. Instead, we had to go back and down climb the ladders we had just come up. It was scary and stupid for both of us – despite the safety cable, these routes aren’t made for climbing back down. We both felt a huge relief when we arrived at the bottom. 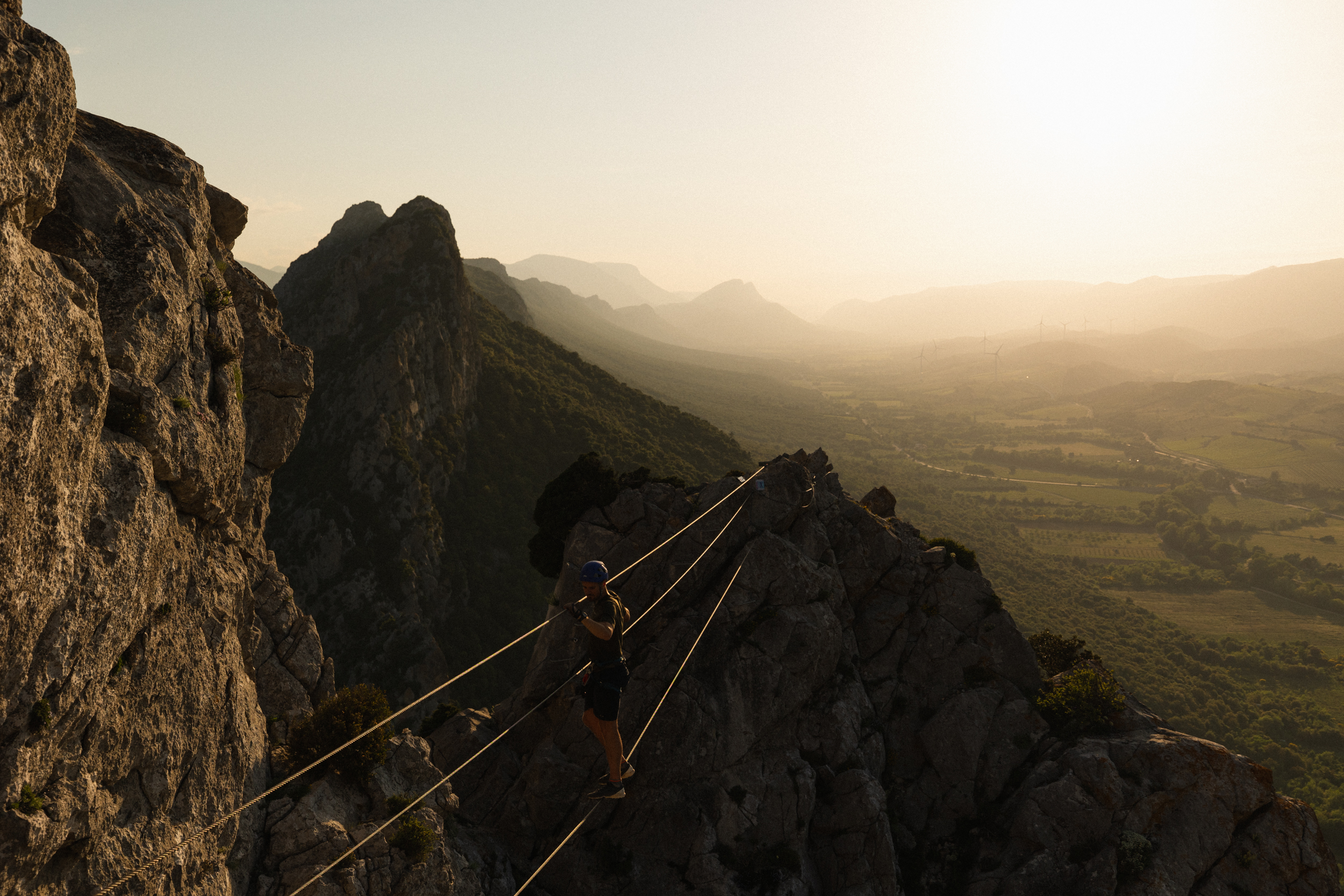 So what is it that I love? My family and friends keep asking me exactly that – they see pictures of us climbing the routes and wonder why we do it; tell me that they never could. The thrill of the climb is a hard one to explain. There is a sense of achievement and pride, but it’s more than that. The routes feel safe but risky at the same time – safe because it is effectively like climbing a ladder and there are usually solid points for your hands and feet, but risky because of that potential safety line drop.

Exploring my body’s strength during some elements of these climbs is a good feeling, and of course many of the routes are quite scenic, and provide outstanding views from a different perspective. And yes, I have had a few ‘moments’ where I think ‘I can’t do this’ (usually when struggling to curl my fingertips around the next metal rung), and have to have a word with myself to keep going – but it’s a huge achievement for me to get past that fear. My confidence is growing with each route that we do, and I find I’m becoming nimbler on my fingers and toes, and more agile moving up the course.

I’ve always referred to Johny as the mountain goat because he ascends rocks so quickly, and I would eventually come across him resting back on his carabiner, just hanging out as he waits for me! But as I become more sure-footed and agile on the routes, he is often surprised and delighted to see that I am right behind him, turning round and then gasping ‘oh, you’re right there!’ before proceeding on. And although I definitely don’t want to fall, and my fear of heights is absolutely still there, I find that I’m not really phased when I look back down from exposed heights. It’s almost as if I have a different focus. The growing confidence means that I enjoy each route more and more, and I think I have instantly proclaimed ‘that route was my favourite route so far’, after each route we have finished.

My love story with via ferratas has definitely begun and I look forward to seeing where it takes me.

After more excitement in the mountains? Check out Jethro Kiernan’s introduction to scrambling the ridgelines of Snowdonia. 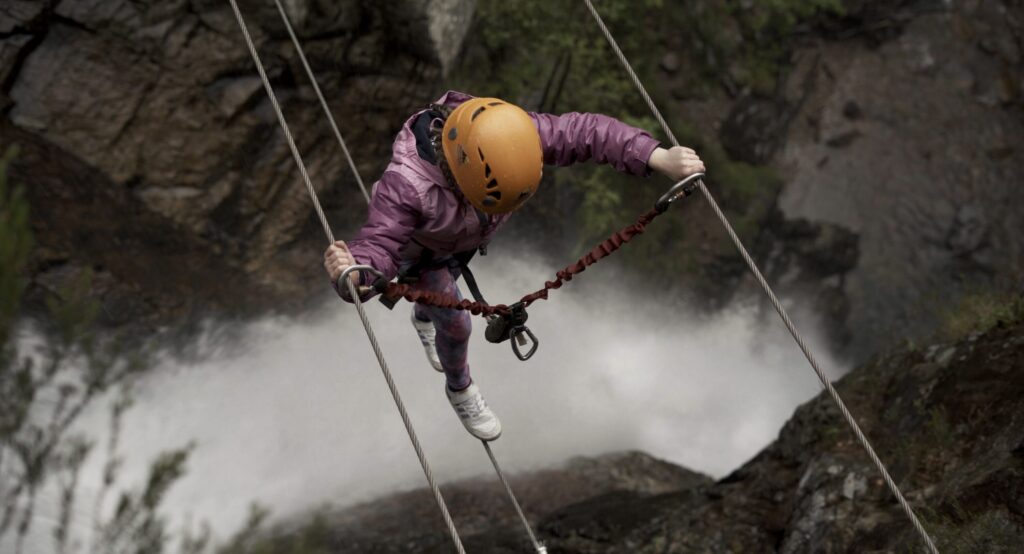 The Ultimate Guide To Via Ferrata in the UK

Everything you need to know including where to go and what to expect from a day on one of the UK's high-octane, high-wire adventures