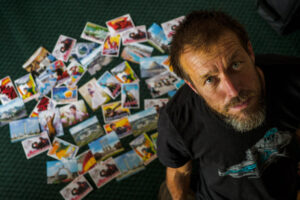 Dan Milner As a professional photographer Dan has documented pioneering adventure in some of the world’s wildest and challenging locations, from snow camping among polar bears in the Arctic, to mountain biking in Afghanistan and North Korea. 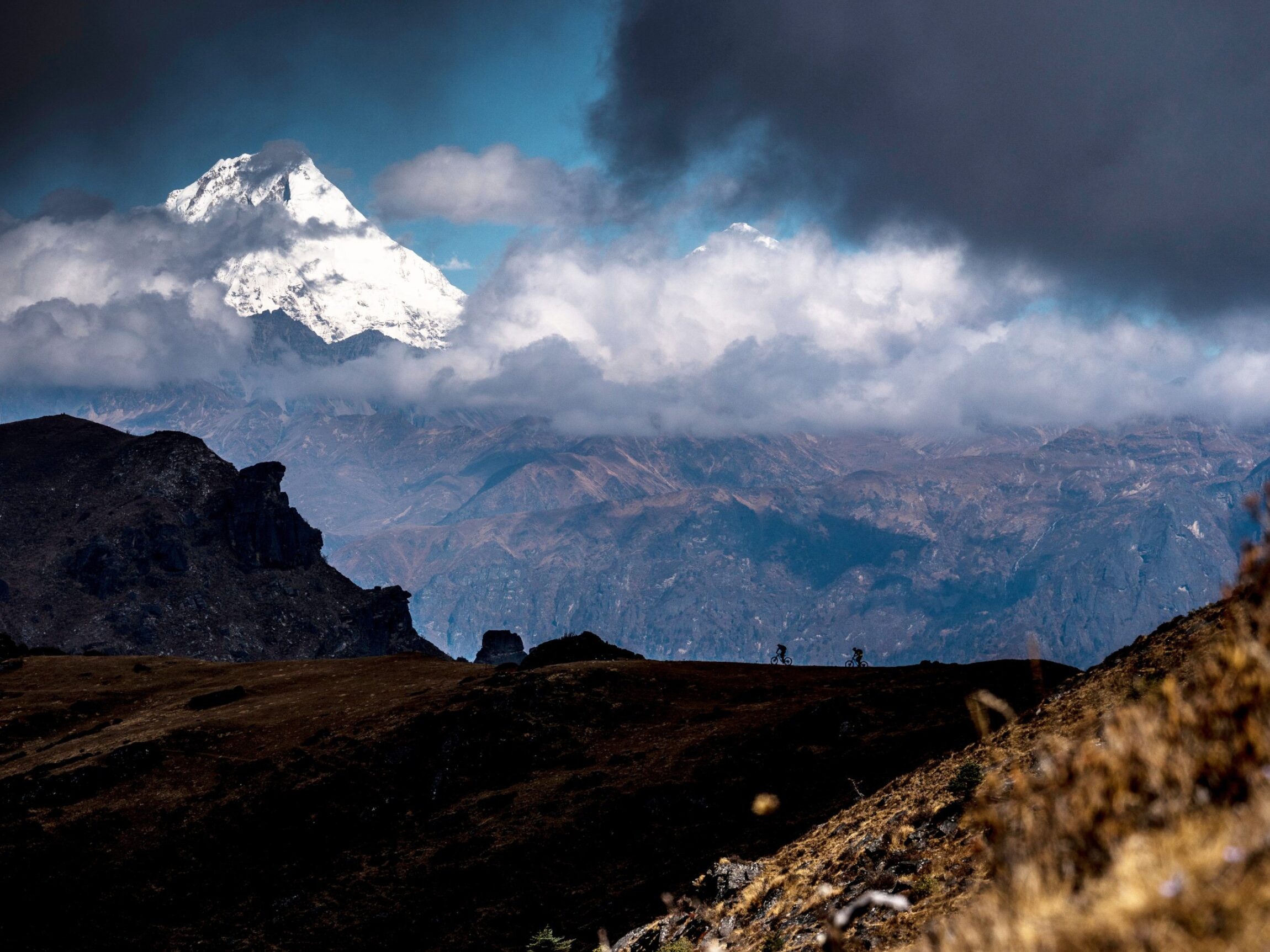 Dwarfed by 7326m-high Jomolhari, Sam Seward and Euan Wilson ride the Chelela trek trail. With climbing above 6000 metres prohibited in Bhutan, most of its highest peaks remain unconquered, and with such a small biomass of mountain bikers in the country, the trails that approach such peaks remain un-ridden too.

This is November, Bhutan’s dry season, and our guide, Pelden, has promised us rain-free riding on some of the world’s best singletrack. These are boasts I’ve heard many times before from local guides I’ve met on trips afar, often delivered with more hope than factual accuracy. Certainly, rain would render the flowing, loamy trails we’ve been drifting down so far into slick mudbaths akin to the worst of the UK’s winter offerings. And adventure’s uncertainties aside, we didn’t travel all the way to Bhutan to slide face first through mud.

Standing on a 12,000 ft high Himalayan ridge, rice-beers in hand, we watch the gathering maelstrom twist clouds into foreboding shapes over the surrounding mountains. They swallow the spectacle of ice-plastered peaks that once glinted in the falling light. We wait expectedly for the thunder to clap and roll, but instead the air remains filled with the flapping of prayer flags — the incessant soundtrack of Bhutan. It’s an enigma, this place – and it draws you in.

Pelden was right about the storm: it fails to materialise, leaving us with just a swirling light-show. I am disappointed not to hear thunder — this is after all, a country whose moniker is Druk yul, or ‘Land of the Thunder Dragon’: a title entrenched in Tibetan Buddhist mythology that reveres thunder as an auspicious occurrence rather than its Western trope as the advent of trouble. An edgy title perhaps, but its overtones are unlikely to win awards at a tourism trade fare. But then perhaps it is apt for a country whose determination to preserve its cultural identity locked it in self-imposed isolation for centuries; Bhutan’s borders were completely closed to foreigners until 1974. But times change. 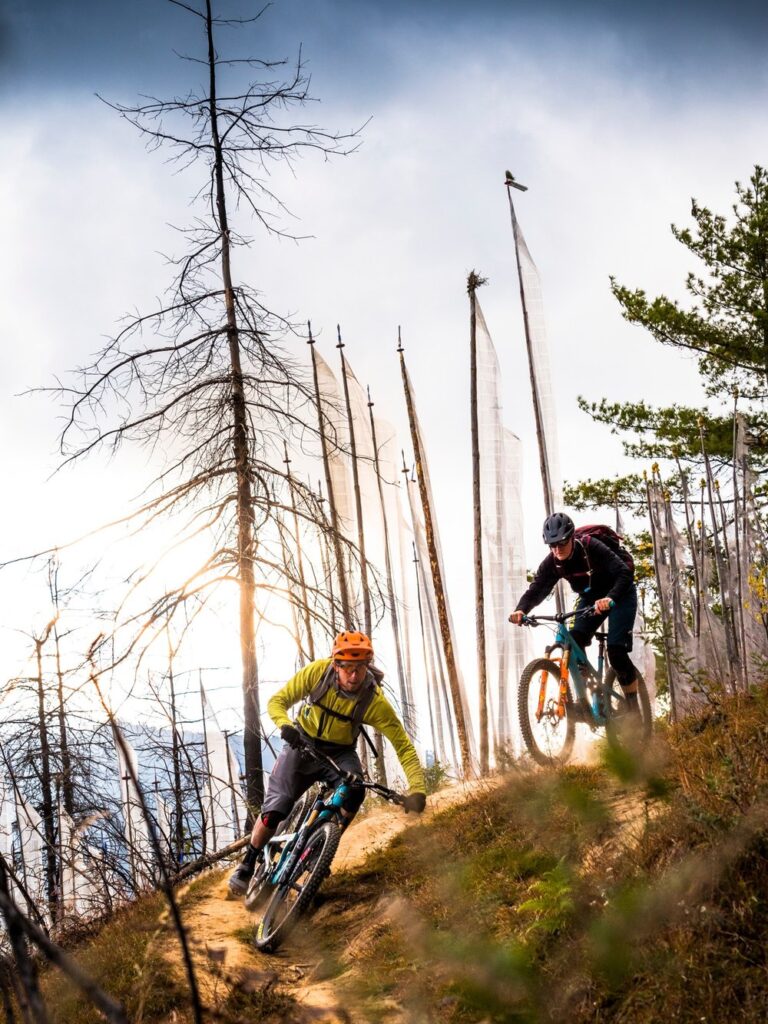 Perhaps the biggest surprise of the trip was to ride hand cut-trails, dug by a small but dedicated crew of local mountain bikers. During their stay, the team stumbled across the Bhutanese soldiers, shovels in hand, who were helping dig trails under the orders of the crown prince, who is apparently an avid mountain biker himself. 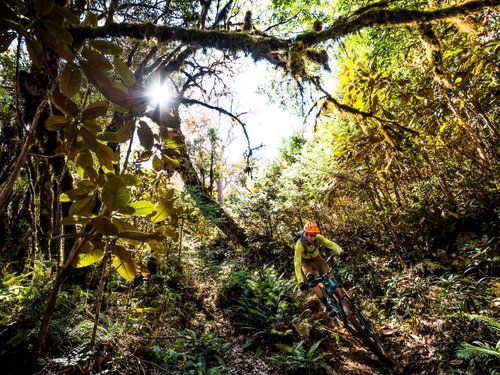 None of the group expected to come to Bhutan to weave through thick verdant jungle, but in fact most of Bhutan is covered with dense forest — a perfect home for tigers and clouded leopards, and loam-seeking mountain bikers. 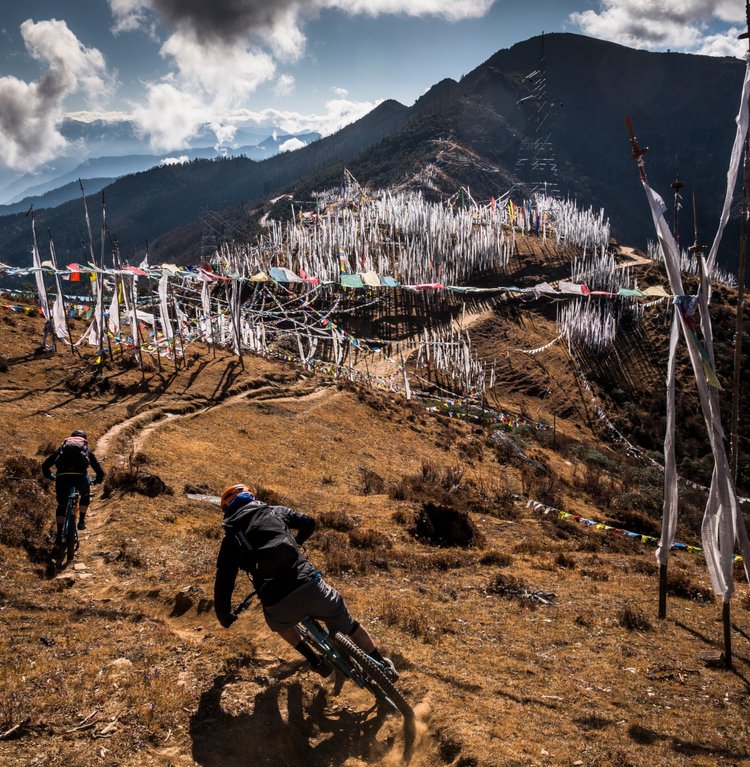 Euan and Sam steer along the Cheela trail towards a vast stand of darshen – white prayer flags – that cover the ridge near the 3,988m high Cheela pass. These striking vertical flags, sometimes four or five metres tall, are typically planted 108 in number following the death of a relative. ‘Planting them is the hardest part of when someone dies,’ jokes Yeshten, the team’s second local guide. 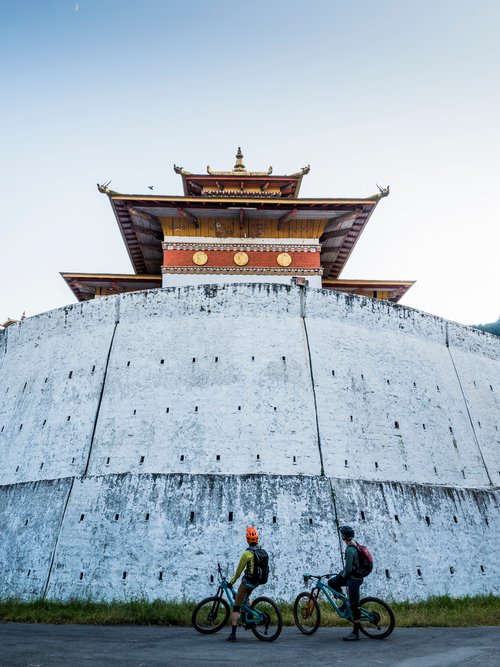 Ancient forts like the Dzongchung near Punakha give a nod to Bhutan’s troubled past, that included warding off invasions from Tibet. Today the country measures its success not by GDP but by a National Happiness Index.

It’s an enigma, this place – and it draws you in

Which is why five mountain bikers — local bike guide Pelden Dorji, US rider Sam Seward, adventure entrepreneur Euan Wilson, videographer Douglas Tucker, and me — now find ourselves camped out alongside a Buddhist temple in the foothills of the Bhutanese Himalaya. The temple beside us is a stoic, hulking square-edged building, trimmed with carved beams — a 500-year old fort, or Dzong, whose roots lie in more fractious times. It has weathered many a storm. But whatever the past, at its feet lies the future: a thread of singletrack that has borrowed the temple’s name. It’s called the Jela trail.

Far below on the valley floor, at a point now obscured by the plunging void, we’ll emerge from this trail next morning, rolling out from between towering 15,000 foot ‘hills’ alongside the alarmingly short runway of Bhutan’s sole international airport. Through this same tiny airport pass about half of the country’s 150,000 annual tourists on a handful of flights per day, the rest coming overland from neighbouring India. Most are allured by cultural  or wildlife tours — treading the stone paths of ancient temples, hoping to spot a tiger, or to photograph the iconic black necked cranes— or to trek in the Himalaya landscape. Very few come to go mountain biking.

But if Pelden has his way, that will change and flowing descents like the Jela trail will help redraw Bhutan’s slowly expanding tourism map. During our nine day trip, we too realise that when word gets out, Pelden’s dream may well be realised. Our guide was not only right about the storm, but about Bhutan’s trail offerings too: they are indeed some of the best singletrack any of us had ever ridden, anywhere in the world, whether they come serenaded by thunder or not. 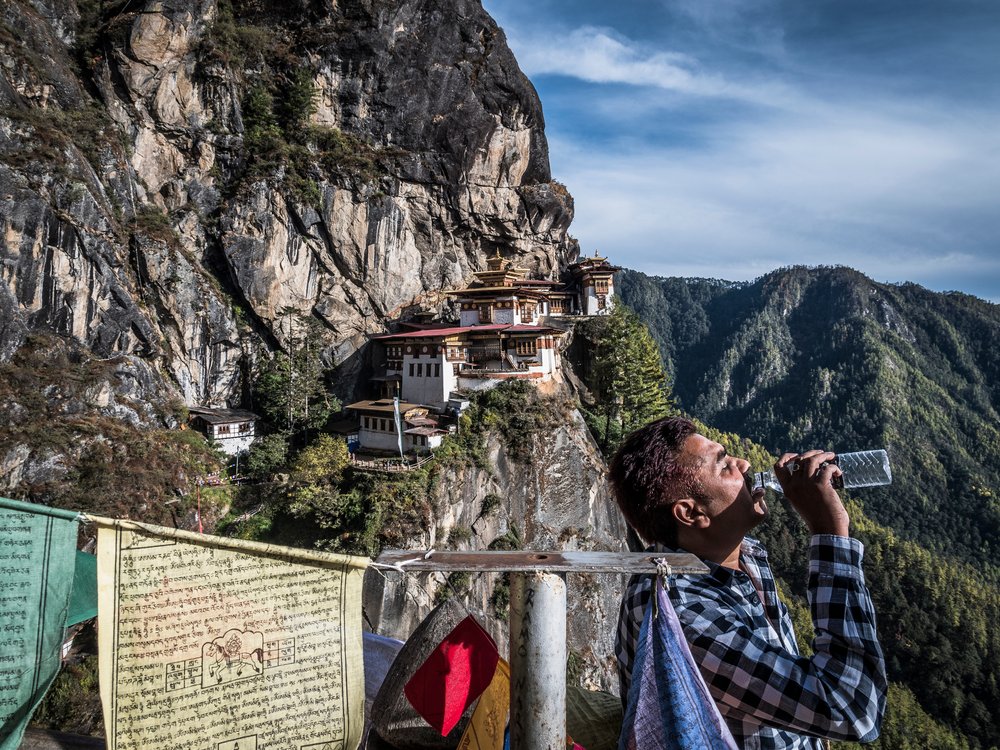 The Tigers Nest monastery, or Paro Takstang, is Bhutan’s most iconic landmark. While the bike team ascended the back of its mountain to its summit, before descending to the 3120m high monastery, most tourists puff up the steep 500 vertical metre climb from a car park, unaware of the tough challenge they face. 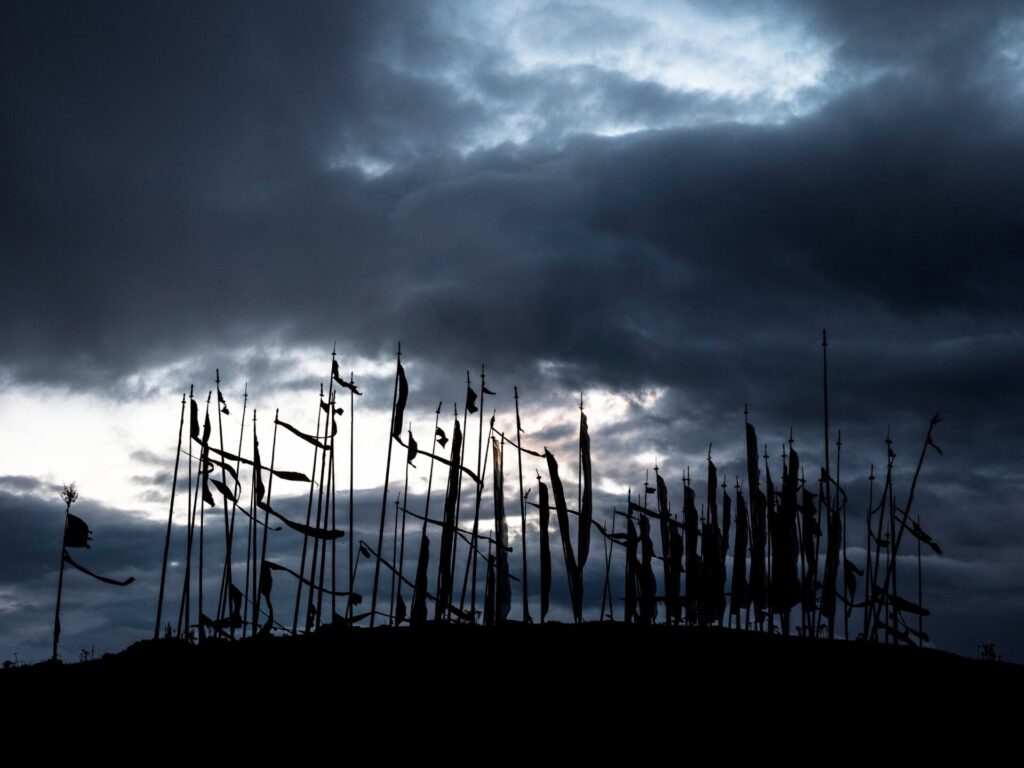 Darshen stand silhouetted against swirling clouds above the team’s camp alongside the Jela monastery. 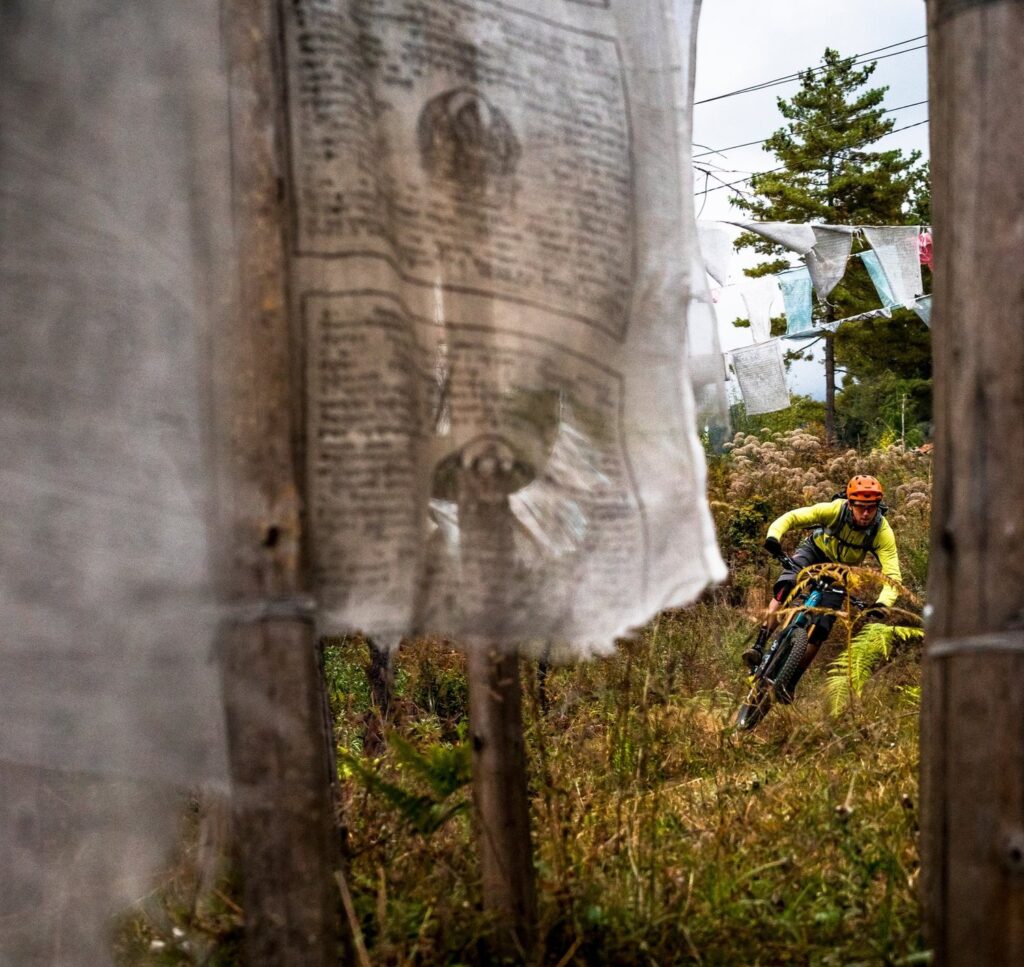 Sam rails through a stand of prayer flags above Thimpu. While the prayer flag aesthetic is shared with nearby Nepal, Bhutan has a unique culture and heritage, and its aims to preserve both are embedded in its strategy for encouraging ‘low number, high spend’ tourism. 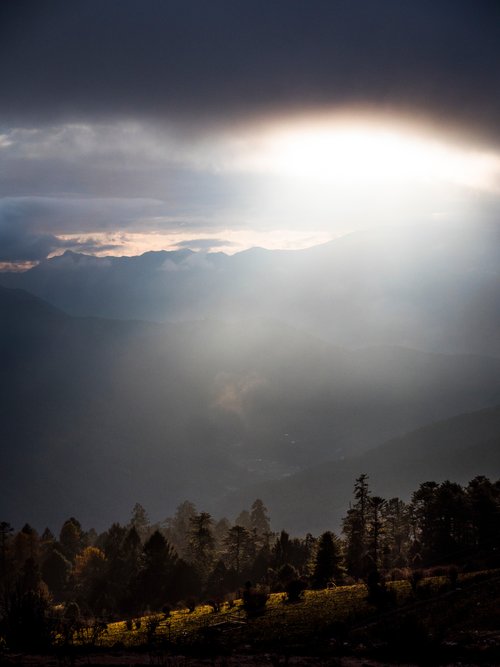 Thousand-metre descents from high ridgelines to braided river valley floors are the norm for mountain biking in Bhutan. They never get old. 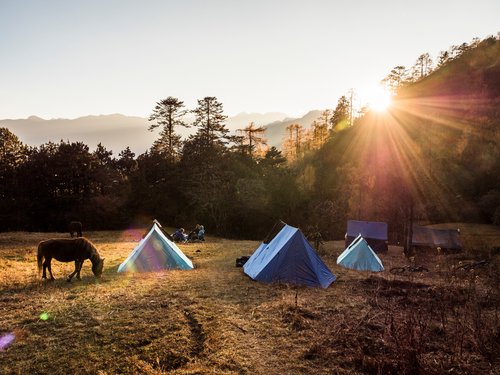 Exploring the Chelela trek trail by bike meant spending two nights under canvas in idyllic clearings on the trail. The camping gear was transported on packhorses; a service that’s growing with the rise in tourism, giving valuable employment to local herders. 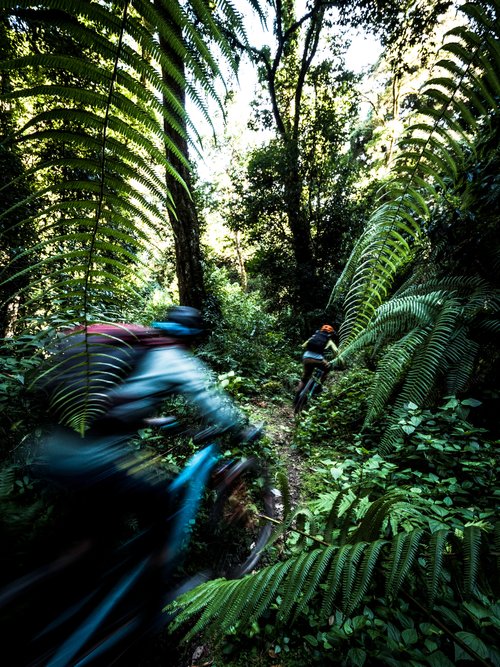 Another day, another descent earned by a ‘Bhutanese shuttle’ as local guide Pelden calls a hike-a-bike. Rural dirt roads can only access so far before the inevitable bike-carrying begins. 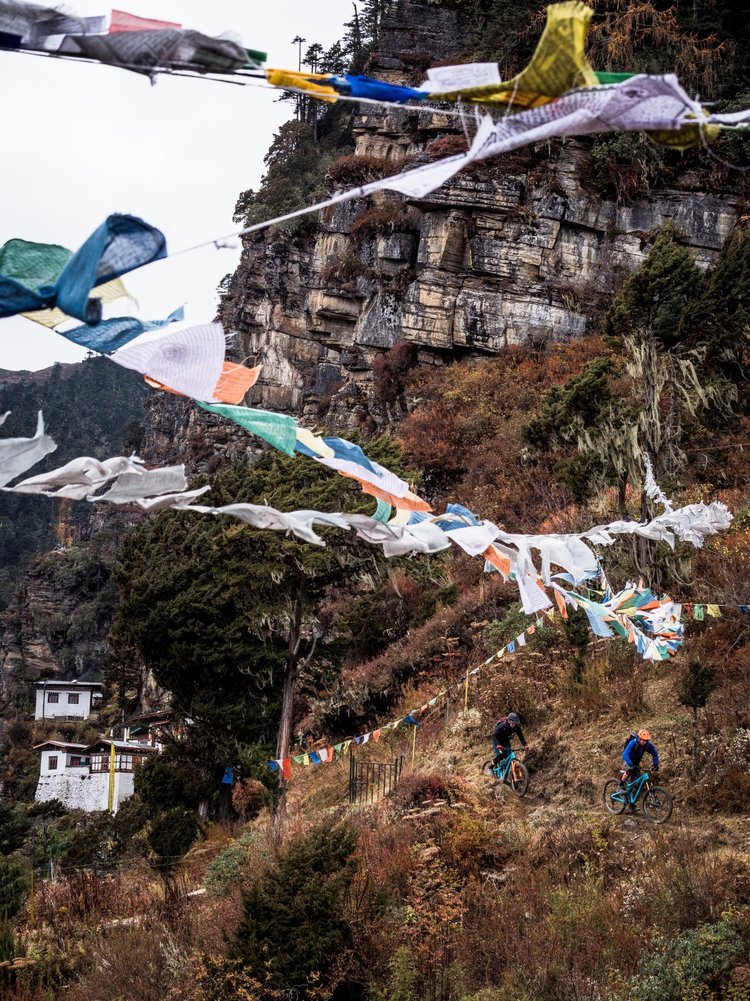 Modern Bhutan is a place of contrast, and no more so than in its relatively recent embrace of modern tourism. Here Euan and Sam pedal state of the art bikes away from the one thousand year old Kila nunnery, towards the most flowing descent of their trip. Tourism is now Bhutan’s second largest industry, after hydroelectric power.

This article first appeared in BASE issue #05, you can read the full issue here. Subscribe to get every issue direct to your inbox, FREE. 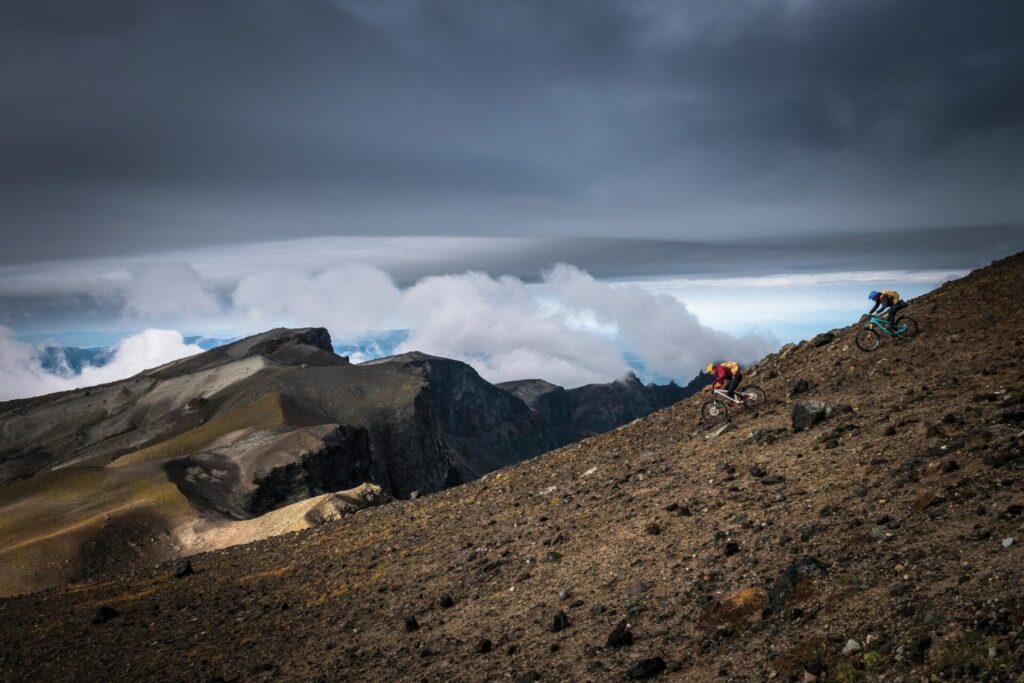 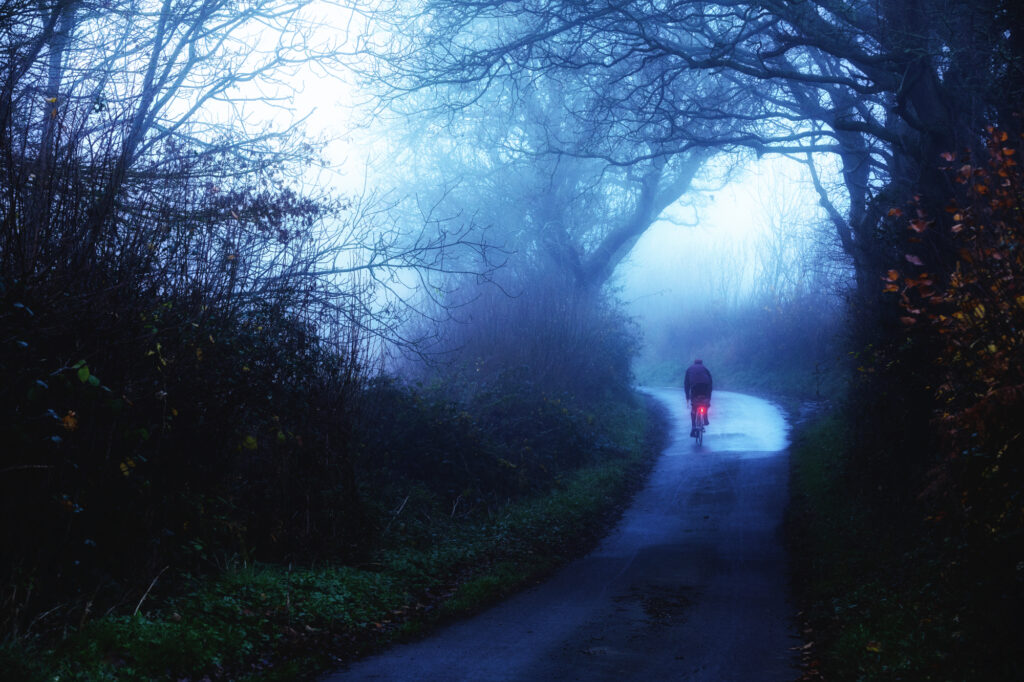 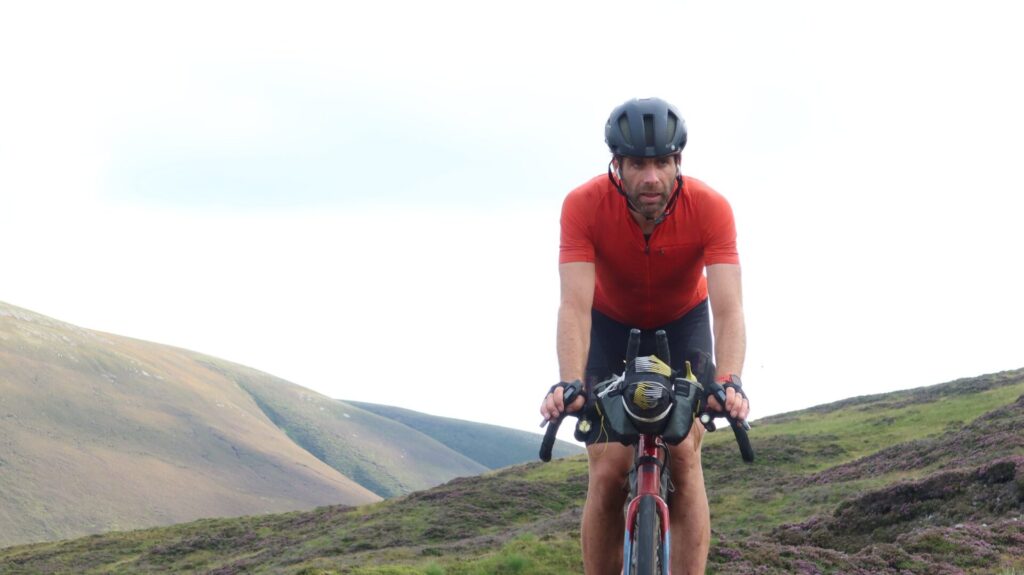 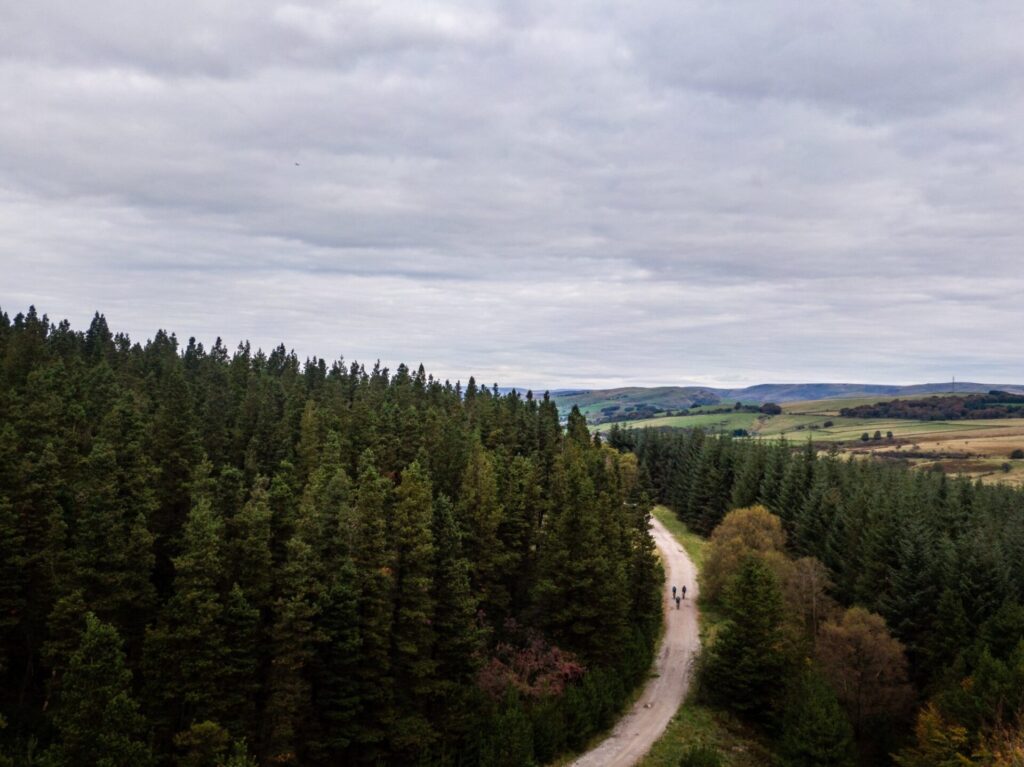 Off-Piste in the Peak District

Highlights from a weekend riding bikes and drinking beer