Nils Amelinckx is a Belgian-bred Lake District resident with a passion for mountain biking, snowboarding and photography. In 2017 he was diagnosed with stage four cancer and ever since has been using his story and imagery to inspire others to live their lives to the fullest, even through times of hardship.

In Golden Hours, Nils heads up to a familiar favourite for a two-wheeled sunrise strike on England’s third highest mountain – the Lake District’s iconic Helvellyn. 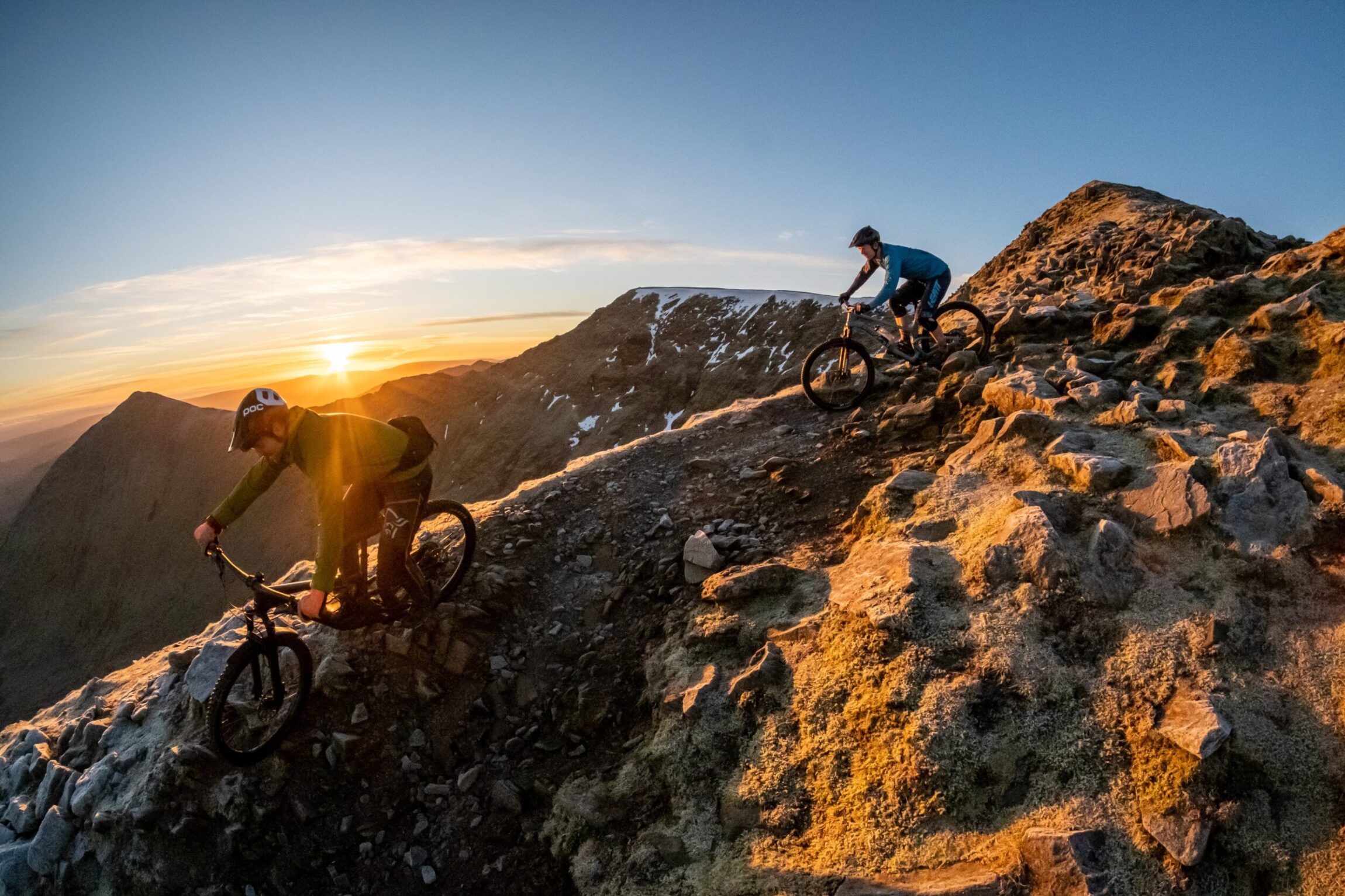 In a state of slumber I fumble around in the dark trying to quickly switch off my phone’s alarm before it also wakes the other half. It is 4AM and her – or worse, the kids’ – involuntary awakening would likely carry a hefty price; something along the lines of two untamable toddlers, completely unable to control their sleep deprived emotions for the remainder of the day. As a family with two young children, sleep is sacred.

I creep down the stairs headed for the garage, only detouring for a quick bowl of cereal in the kitchen. Every time the spoon strikes the bottom of the bowl I wince, and halfway through I give in to fear and opt for a more sleep-respecting banana instead. The night before I had meticulously prepared my bike and kit with the aim of getting out of the house as quickly and efficiently as possible. Not only to ensure the household’s remaining dream factories would keep churning, but to also give me the best chance of winning the race against the ever-growing threat of the rising sun.

For days I had been keeping a close eye on the weather. It was the tail end of February, and forecasts for the Lake District at this time of year can be a tad fickle. They had remained stable for a while and repeatedly pointed towards dry and settled conditions. Everything seemed to be falling into place. It was my ‘good’ weekend in between my two weekly chemotherapy treatments and, as an added bonus, forecasts made mention of possible cloud inversions – when normal temperature distribution flips and warm air ends up sitting on top of cold air pushing clouds down to valley level. Better still, Alex – also a father of two, whose excessive noisemaking in the middle of the night would carry similar repercussions – was daft enough to roll out of bed at a similar time to join me. He would also be my camera’s primary focal point for the day.

Photographers, particularly ones specialising in capturing landscapes, often make reference to ‘The Golden Hour’. The thirty or so minutes before and after sunrise or sunset tend to yield the most beautiful golden light, so it is not uncommon to plan entire shoots around this. Add the possibility of Mother Nature adding a dollop of wispy atmospheric conditions and you have a recipe for some visuals you may actually want to keep.

I have always preferred sunrise to a sunset. They come armed with unique characteristics, like the sky’s purple-ish hue and blades of grass often adorned with dew droplets or even a touch of frost in winter. They feel somewhat exclusive seeing as most people will witness far fewer sunrises than their evening counterpart, a pattern which on the trail translates to an element of solitude. You have your adventure at dawn and come back for the rest of the day to play with. You are making the most of your day, and have won the day before breakfast. 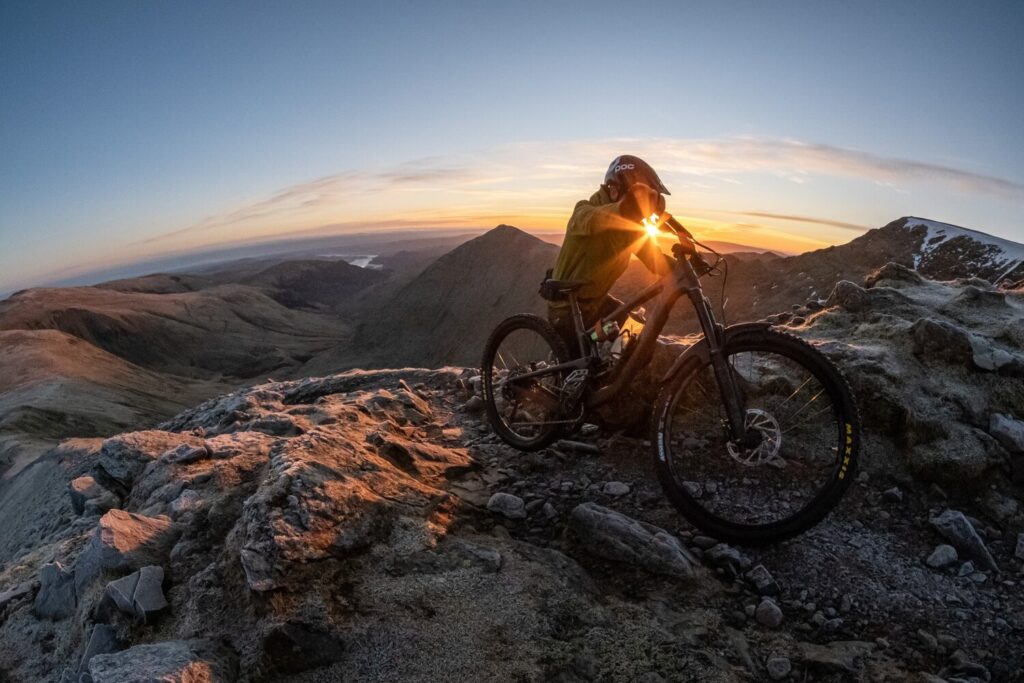 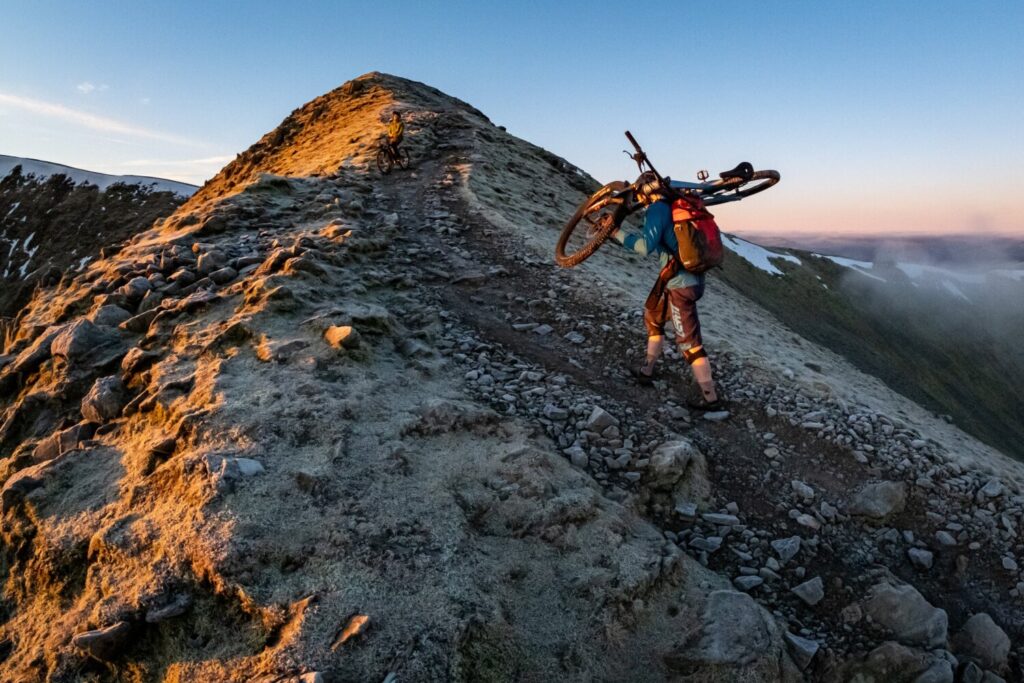 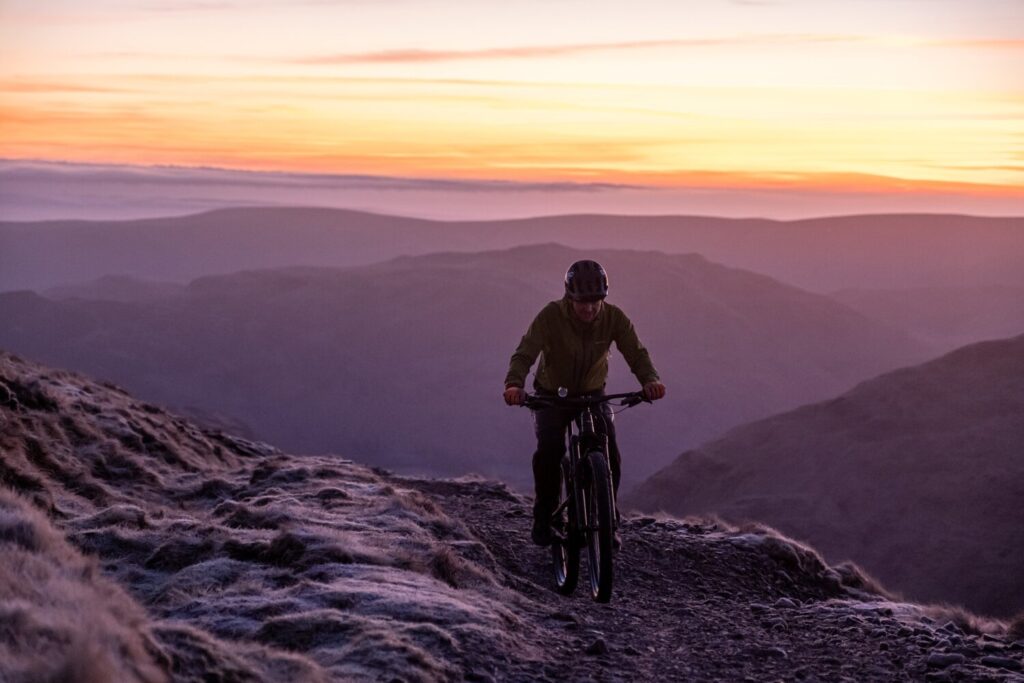 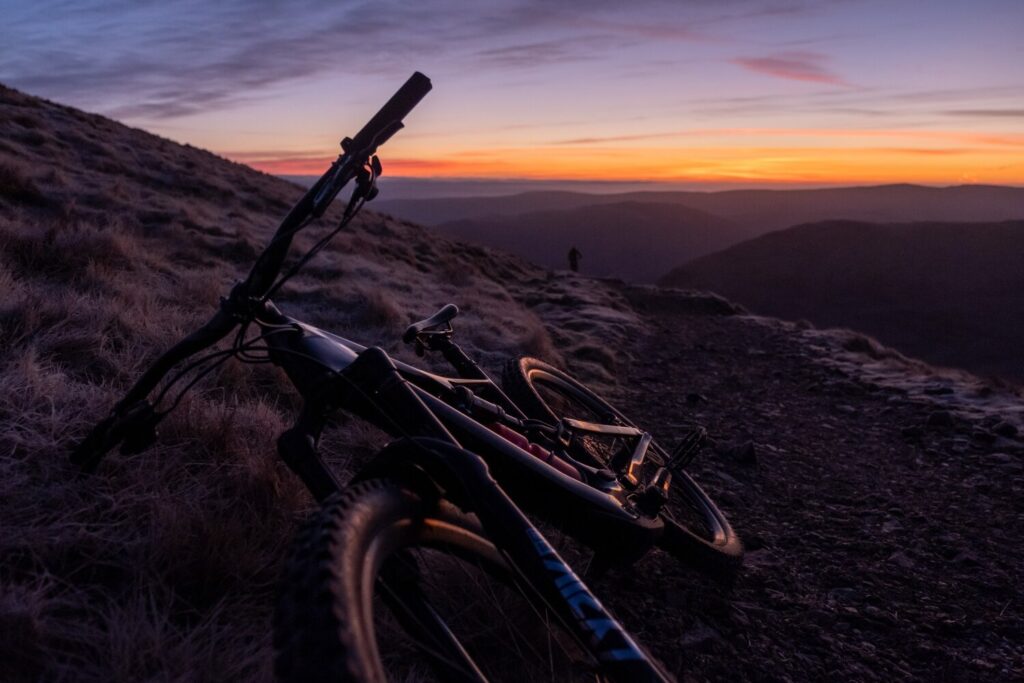 I quickly realised I may not be able to add days to my life, but I was determined to add life to the remainder of my day

Unfortunately, I stopped winning at life just under four years ago, when I was politely informed I had stage four cancer at the age of 30. In layman terms that equates to a death sentence, with an average of five years left on death row. I quickly realised I may not be able to add days to my life, but I was determined to add life to the remainder of my days.

I also wanted to document life and the thrills of adrenaline-fuelled exploration through photography, so that I could inspire myself to keep fighting during rougher times or whilst recovering from yet another bout of surgery. I also wanted those images to be part of my legacy to my kids, for them to hopefully be inspired further down the line should I no longer be there to fulfil that task myself. Family, friends, fells, freewheels and #f*ckcancer would all become equally important ammunition in my battle, and the camera would come along to document it all.

Mountain bikes have slowly become my adventure vehicle of choice in the ten or so years of living in the Lake District. Moving here from the south coast as an obsessive rock climber, I hadn’t quite anticipated the difference in rainfall between the North compared to the south of England, only to come to this harsh realisation by getting rained off crags on multiple occasions. On rainy days I began to subconsciously pull the mountain bike from the shed instead to save myself the embarrassment of once again having to back-off from climbs in rather sketchy conditions.

As an ex-seasonaire, mountain bikes offered similar thrills to winter sports in having to pick your line down the hill, just-in-control descents and the natural buzz of adrenaline. They opened up the whole area to endless exploration; on a bike you travel fast enough to actually cover some ground whilst still moving slowly enough to take in the sights, smells and serenity of your surroundings. As a result, bikes quickly became my new obsession, and provided me with huge amounts of resilience during treatment and recovery.

Alex picks me up under a starlit sky in his VW Crafter campervan with music loud enough to wake our entire dormant neighbourhood, single-handedly undoing all my careful prep work and tiptoeing in the blink of an eye. He had obviously already reached the ‘safe zone’ in his mind, and any excessive noise from there on in was no longer his problem to worry about.

We had chosen Helvellyn as this morning’s mountain of choice as some of its best trails face towards the rising sun and a fairly straightforward climb up to its 3118ft high summit would give us a strong chance of summiting before the first rays began to illuminate the park’s highest peaks. As an added bonus, cloud inversions were forecast to be most prevalent in the area of the Helvellyn range. 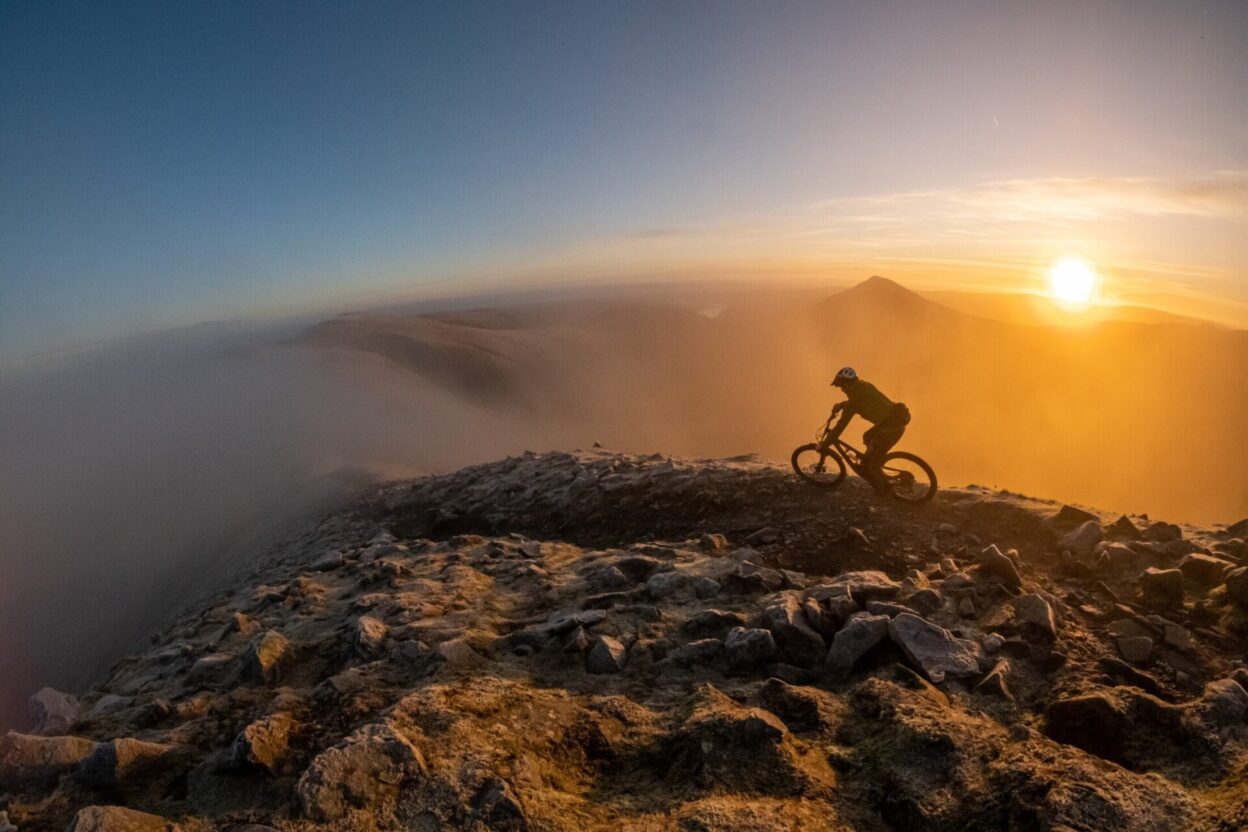 Whilst witnessing a sunrise from the valley floor is often magical, experiencing it from a summit can be other worldly. On a clear day, summits are doused in golden rays well before the rest of the landscape, making altitude the governing factor between night and day. The resulting contrast dramatically accentuates the outlines of ridgelines set against a backdrop of morning haze. It is all about being in the right place at the right time.

En route to Glenridding, our starting point at the foot of the mountain, my eyes subconsciously survey valleys for the forecasted low-lying clouds which, to my disappointment, remain largely absent. Despite endless poring over weather charts and maps for the most photogenic conditions, today I may have got it wrong. I have to console myself with the fact that, given the time of year, we are still going to be blessed with a beautiful and settled sunrise, albeit against a simple steel blue sky.

As we set off, a faint glow begins to emerge above the eastern horizon and the tranquillity of the sleepy valley is disturbed only by the sound of our tyres crushing ice and frost heave collapsing under the weight of our bikes. Despite my disappointment at the prospect of a potentially less than perfect sunrise, our initial pace is well beyond my comfort zone. This sunrise will wait for nobody, spurring us on and rendering a nervousness not dissimilar to the feeling you might get during a race.

Within minutes our pace, combined with the stale air’s sub-zero temperatures, sends my lungs into a frenzy of searing pain. It is a stark insight into what life must be like for the voluntarily unfit. For me, it’s my souvenir of litres of cytotoxic drugs that are pumped into my veins on a regular basis to extend my life.

As the path narrows onto a ridge between Lower Man and Hevellyn’s summit plateau my tank is empty. From here on in things are no longer rideable, and the only way forward is to shoulder the bike. Every step requires increasing amounts of dwindling willpower, and I force myself to take at least ten steps before allowing a small breather. As I finally trudge onto the crest of the ridge I subconsciously begin to grin. Towards the west, the rest of the park is blanketed under one big cloud inversion, with only the highest summits peeking out like small islands in a sea of clouds. 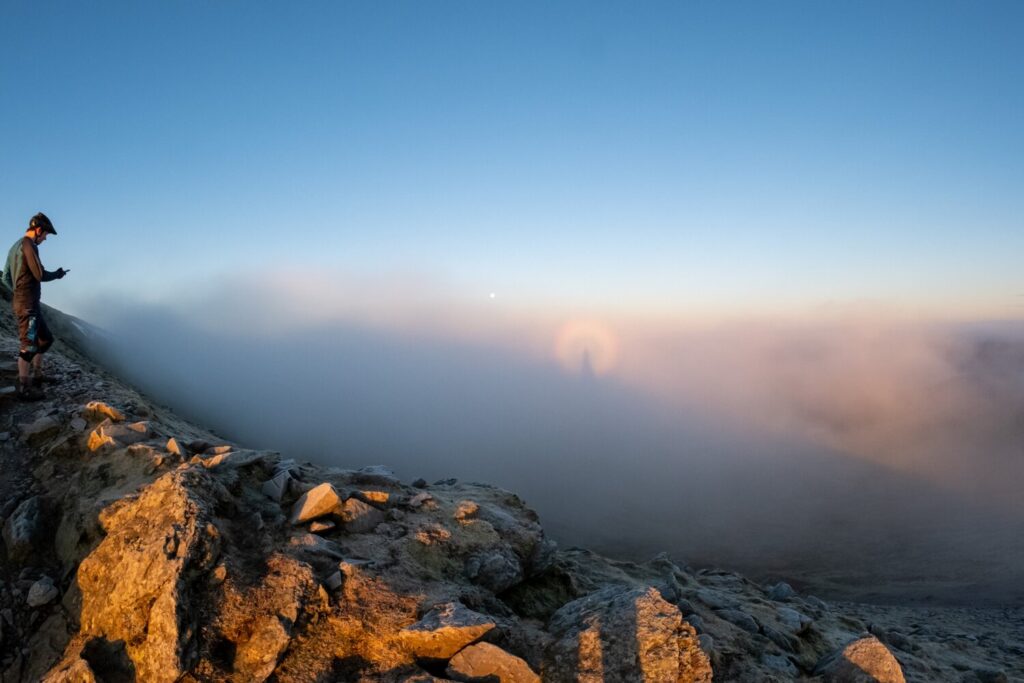 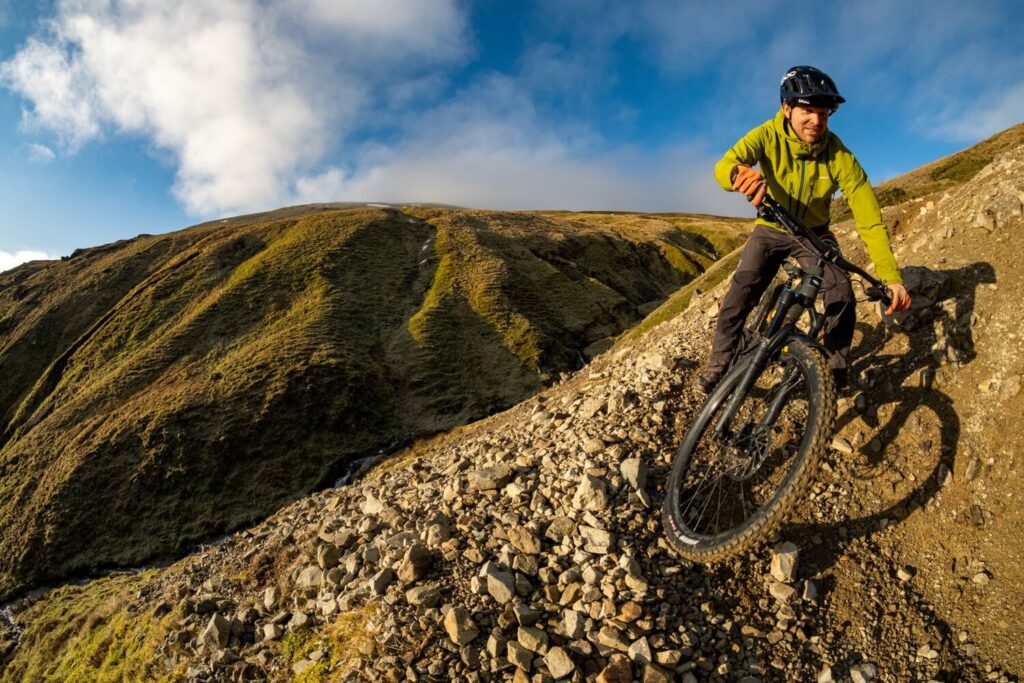 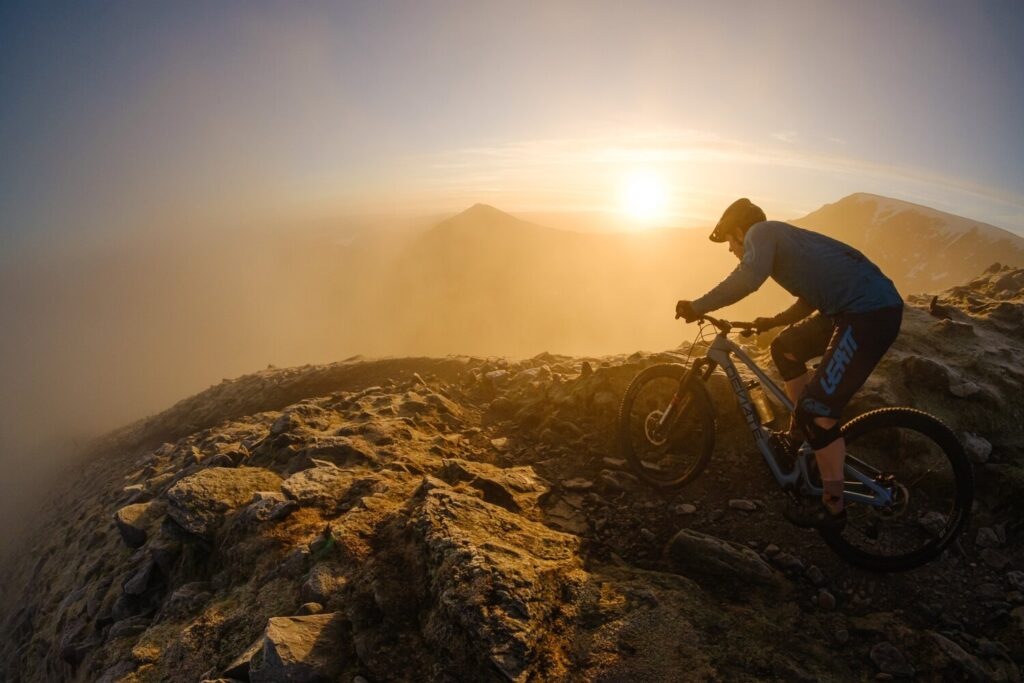 As I look up towards the summit I see a familiar face looking down at me. James, another local photographer and mountain biker, had a similar idea to us and had set off from Glenridding some 30 minutes before us. Equally beaming, he shouts words of encouragement whilst he points his camera towards me as I struggle my way up the last few hundred metres to the summit plateau.

When the sun finally crests above the horizon, Helvellyn itself casts a huge triangular shadow over the sea of clouds, and our own shadows become surrounded by Brocken spectres; rare halo-like rainbows only visible in the mountains when specific conditions are met. Soon after, the sun delivers enough thermal lift to send the inversion upwards and the spectacle begins to evolve like a perfectly orchestrated light show.

As we set off descending from the summit back down the ridge towards Lower Man, it feels as if we are riding across a natural dam holding back a sea of clouds to our left. The inversion cannot be held back by the mountainous barrier in its entirety, and occasional overspill creates temporary whiteout conditions before clearing up again to reveal an entirely different vista. I find myself snapping away feverishly with little regard for composition as I am unsure where to point the lens first. We can’t help but to ride the ridge over and over again, giddy with excitement and with every descent feeling slightly different whilst the light and cloud formations continuously change around us.

By 8AM we are back on the valley floor, coffees in hand and revelling in what we just experienced. This was the epitome of a golden hour, and to my mind the spice of life everyone should seek out and dedicate time to. The privilege of witnessing scenes like that nourishes the soul and I was content knowing that the memories I captured, both mentally and digitally, would keep me buzzing for weeks regardless of what life would throw at me next.

For more about Nils’ adventures in the Lake District, head to DiscoverInteresting.com

Freeride bike lines in an abandoned coal mine 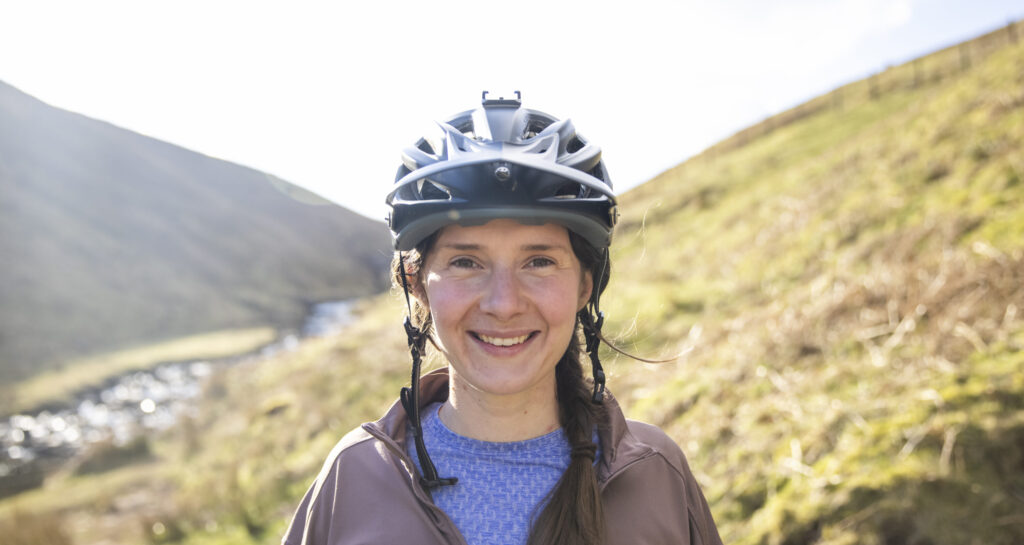 The Responsibility of the Trail and Life After Racing