The evolution of personal flotation devices 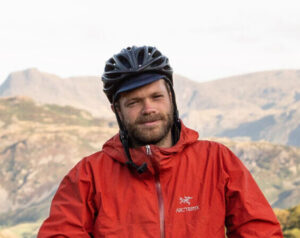 Waterways and oceans are some of the most challenging and rewarding wilderness environments on Earth. Yet from deep ocean swells to flooding canyons, they’re also some of the most volatile – and potentially deadly. Water is not our natural habitat, and any adventures on it comes with the omnipresent threat of drowning. Some of the most devastating accidents have unfolded in the most benign conditions. Developing the skills and equipment required to operate safely in such environments is just another example of the human capacity to evolve and adapt, as we hone the tools to keep us safe. From their first days as rudimentary and often cumbersome pieces of equipment, to their current incarnation as highly evolved and movement-specific wearables, this is the story of personal flotation devices.

One of the very earliest forms of transport, boats have been used to explore new lands and reach new hunting territories for hundreds of thousands of years. Based on evidence located in excavation sites on the Indonesian island of Flores, it’s understood that early humans were navigating open waters as far back as 900,000 years ago. The very first PFDs known about in the archaeological record were inflated animal skins, evidence of which can be found in artwork in the British Museum: an ancient gypsum panel dated to nearly 3,000 years ago depicts Assyrian soldiers holding on to inflated animal skins to cross rivers.

While buoyancy would have continued as a vital asset in various forms of water travel, purpose-built wearable flotation devices weren’t introduced until much more recent times. In 1854, Captain Ward of the Royal National Lifeboat Institution (RNLI) developed the very first proper lifejackets for the volunteers that formed the institution’s crew members. Lifeboat crews  rely on access to a full range of movement to be able to perform rescues. But in the 19th century, crews were also required to row their way through stormy seas; this put manoeuvrability at the forefront of the jacket’s list of requirements. A whole host of different materials and designs were tested, including a canvas jacket filled with large pockets of air, a vest formed of horsehair and rushes, as well as a jacket made of buoyant woods like baobab and balsa. Ultimately though, the cork lifejacket was introduced to the volunteer crews of the RNLI.

Just six years later, in February of 1861 a historic storm wrecked more than 200 ships on the UK’s east coast. The Whitby lifeboat crew launched several times to save victims from the damaged vessels. On the lifeboat’s sixth journey, the lifeboat capsized and all but one of the crew were lost. The sole survivor was a man called Henry Freeman, who was wearing a new design of cork lifejacket.

Although materials and aesthetics have evolved somewhat since the creation of wearable flotation, the foundations of design have actually remained pretty consistent, providing straightforward solutions to the simple dilemma of keeping a person afloat in rough seas or whitewater.

At the start of the 20th century, a new moisture-resistant, quick-drying, resilient, and buoyant fibre harvested from the fruit of the gigantic tropical kapok tree was now introduced to replace the now-ageing and less effective cork lifejackets. Kapok fibre is a combination of hair-like follicles containing natural oils which make them non-absorbent to water. At the same time, their air-trapping properties make it extremely buoyant. Once kapok had been manufactured into lifejackets, the supporting buoyant force was three and half times stronger than that of cork. 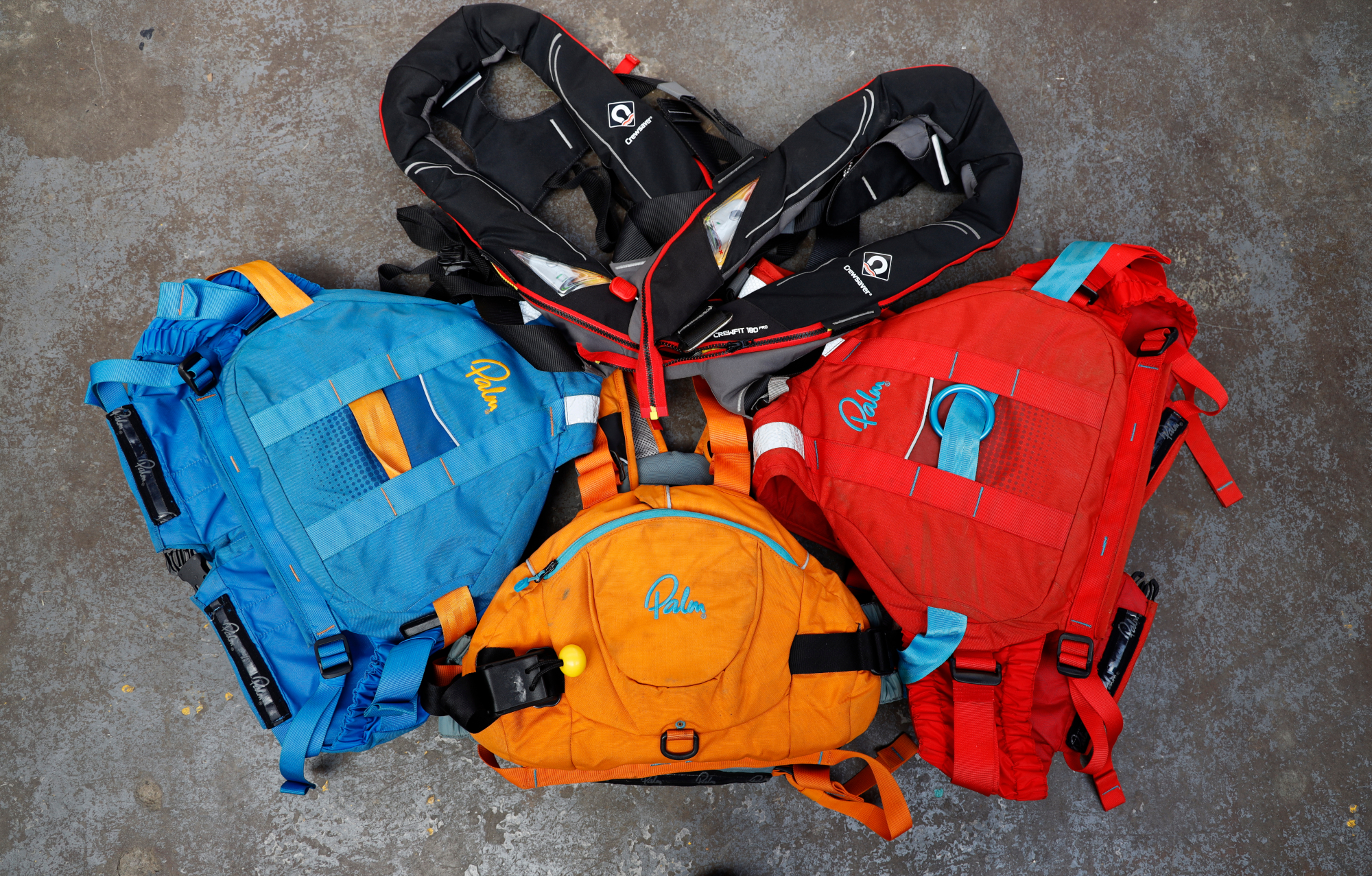 Palm and Crewsaver PFDs at BASE magazine HQ.

To maintain a suitable level of buoyancy though, lifejackets remained bulky and restrictive to wear, meaning much of the time they were cast aside rather than worn. Work soon turned to slimming down the lifejacket profile. In 1900, Gustave Trouve went one better, patenting a battery-powered lifejacket which could inflate when needed, meaning its wearer was unobstructed while wearing it deflated: it was the very first compact PFD.

But despite the advances and how many lives they proved capable of saving, international regulations to enforce their use on ships wasn’t introduced until the first international convention for the Safety of Life at Sea was held in 1913 – the year that followed the sinking of the Titanic in he North Atlantic.

In the 1920s, Peter Markus further developed the design with rubberised air pockets that would inflate with liquid carbon dioxide when the jacket cords were pulled. The idea was presented to the U.S Government which, with World War II fast approaching, became standard regulation for U.S. Navy airmen. Further research was then conducted in the UK during World War II. Edgar Pask OBR, the first Professor of Anaesthesia at Newcastle University, set out his own experiment in which he self-administered anaesthesia to instigate unconsciousness – sometimes to the point of apnoea – and placed himself into a pool wearing the lifejacket he would be testing. Pask’s extraordinary work earned him the OBE and the description of ‘the bravest man in the RAF never to have flown an aeroplane’.

The development of synthetic, oil-based foams during the ‘60s though soon lead to the introduction of the Beaufort lifejacket. With a stronger buoyancy once again, the Beaufort jacket could support the weight of both the wearer and the casualty and – due to the shape of the design – ensured that its wearer would float face-upwards even when knocked unconscious. In addition to the added buoyancy, the Beaufort jacket was painted bright orange for far greater visibility at sea and fitted with a light, a casualty recovery loop, and a safety line. 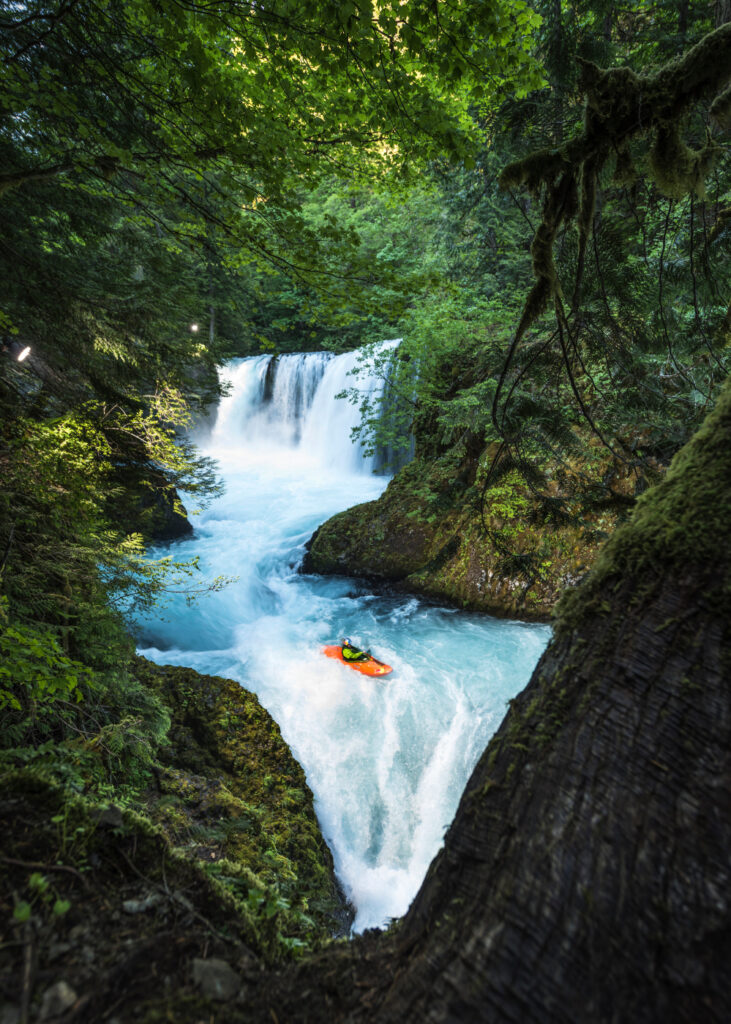 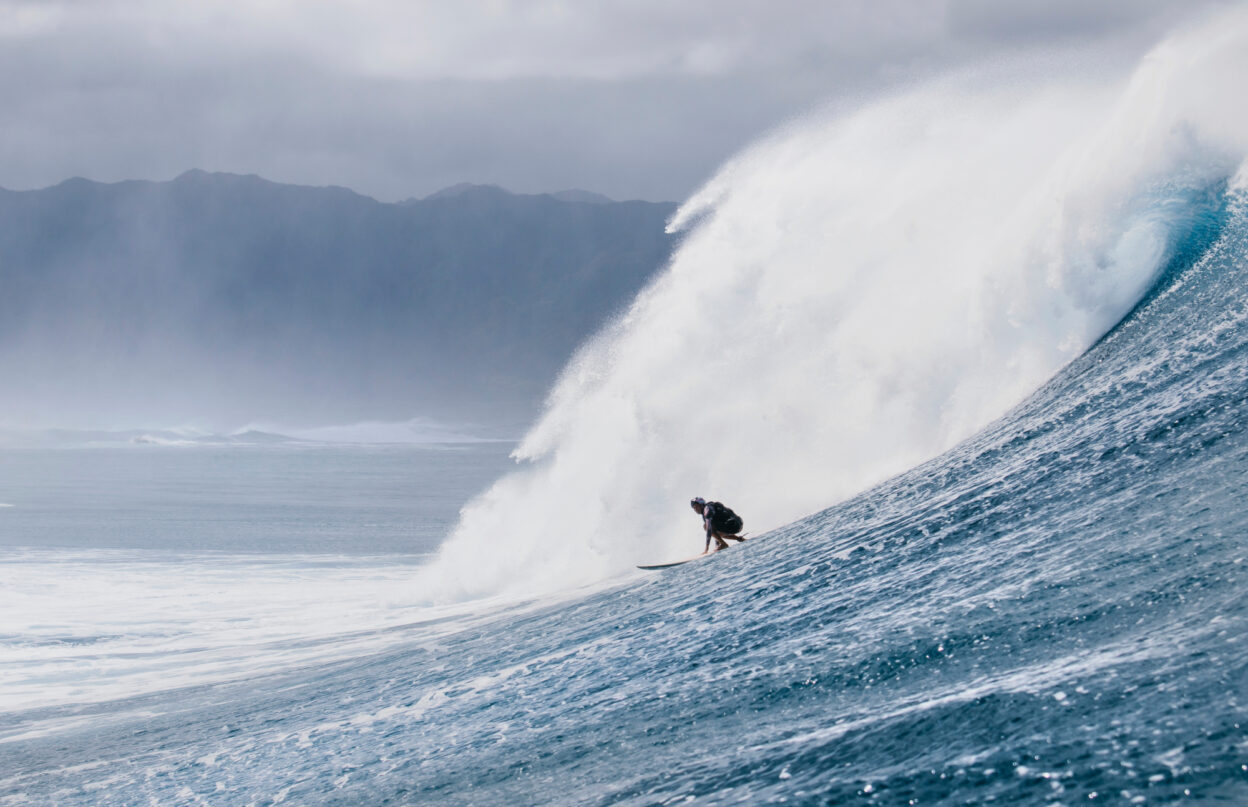 Raquel Heckert wears an advanced modern CO2 flotation vest during a big session on one of Oahu’s infamous outer reefs.

Today, of course, the personal flotation device has evolved well beyond those primitive early days. And while the fundamentals remain the same, the way buoyancy technology has since adapted and pushed into new avenues has without doubt saved countless lives. Kayakers are able to run highly technical and extreme whitewater in narrow canyons using PFDs with a far smaller profile, yet which remain extremely buoyant, meaning that whilst still totally capable of lifesaving, the wearer remains unrestricted and able still to negotiate rapids and technical elements of the river. For emergency situations, extremely low profile inflatable buoyancy aids have been designed to fit concealed into a hip pack or low profile vest.

In the world of backcountry mountain sports, inflatable avalanche packs (ABS) have been equally effective. They are able to keep the wearer above the chaos of moving snow and debris in the event of becoming engulfed by an avalanche. Whilst the first ABS airbag was introduced in 1985 by ABS founder Peter Aschauer, it remained for some time a niche product. Today, however, inflatable ABS backpacks are a staple for backcountry skiers and snowboarders.

ABS avalanche packs, it has been suggested, have opened  off-piste mountain environments to a new group of skiers and snowboarders who might lack the required experience and knowledge to operate safely in those environments, therefore putting them and others in positions of undue risk. Similarly, inflation vests have, in some ways, revolutionised big wave surfing. While almost all water based activities can be made safer through the introduction of a buoyancy device, surfing – and in particular big wave surfing – presents itself as somewhat of an outlier. Despite the fact that during a particularly serious wipeout (think knocked unconscious in 50ft + waves) buoyancy will save lives, the requirements of surfing itself – particularly navigating a route out through the line-up – makes continuous buoyancy largely incompatible with a surfing. You can’t for example penetrate the water wearing a lifejacket in order to get beneath a breaking wave in front of you.

In the past five or six years, vests with inflation-on-demand technology through the use of CO2 cartridges have made their way into the big wave arena. Right from day one, it was clear that lives were being saved and major injuries being avoided. And surfers could go about their session relatively unimpeded by the deflated vest.

During WW2, professor Edgar Pask self-administered anaesthetics to instigate unconsciousness, then laced himself in a pool wearing the lifejacket he was testing

The impact these CO2 vests has had on the performance of surfing, particularly in terms of the renaissance of paddling into big waves rather than towing, has been substantial. Surfers have been able to take greater risks in paddling for waves they might have previously been happy to let roll them by. At the same time, surfers have become more comfortable putting themselves in harm’s way in the impact zone during big sessions with the knowledge that, if called upon, their vests will bring them to the surface.

This kind of insurance policy isn’t without its own controversy. Many experienced big wave surfers felt that this ‘democratisation’ of big wave line-ups would ultimately prove dangerous, with less skilled or competent surfers tempted to take on waves of a size and power that were beyond their skill level. Where surfers previously would only make it out to those biggest and most dangerous of line-ups with decades of experience and specifically trained fitness behind them (and perhaps a safety crew on jet-skis), the ease of buying an inflatable flotation vest meant those line-ups would be more accessible to a new group of arguably less experienced and less prepared individuals.

Concerns like this have led to the necessity of waivers being signed prior to such products are available for purchase, and in some instances certification must be presented. Patagonia’s personal surf inflation vest, for example, is available exclusively to experienced big wave surfers who have been certified by the Big Wave Risk Assessment Group.

But despite some concerns within elite circles, there is little doubt that buoyancy and inflation devices not only allow the boundaries to be pushed within adventure sports, but also save lives on a regular basis.

Ultimately, the job of any adventure safety gear is to be as unobtrusive and therefore appealing to use as possible; that way, it will at least be used. If safety devices are not worn in the first place, there’s no way that they can do the job they were designed to do. There’s an interesting parallel here with life-rafts for yachts; a modern inflatable life-raft that can carry four people now packs down into a 140 litre duffel bag, so virtually every yacht owner carries one on board – but it’s not always been this way. And this is exactly what we’ve seen with buoyancy devices, and the evolution towards today’s highly effective and movement-specific designs maximising the chances of the personal flotation device being used should the scenario call for it. 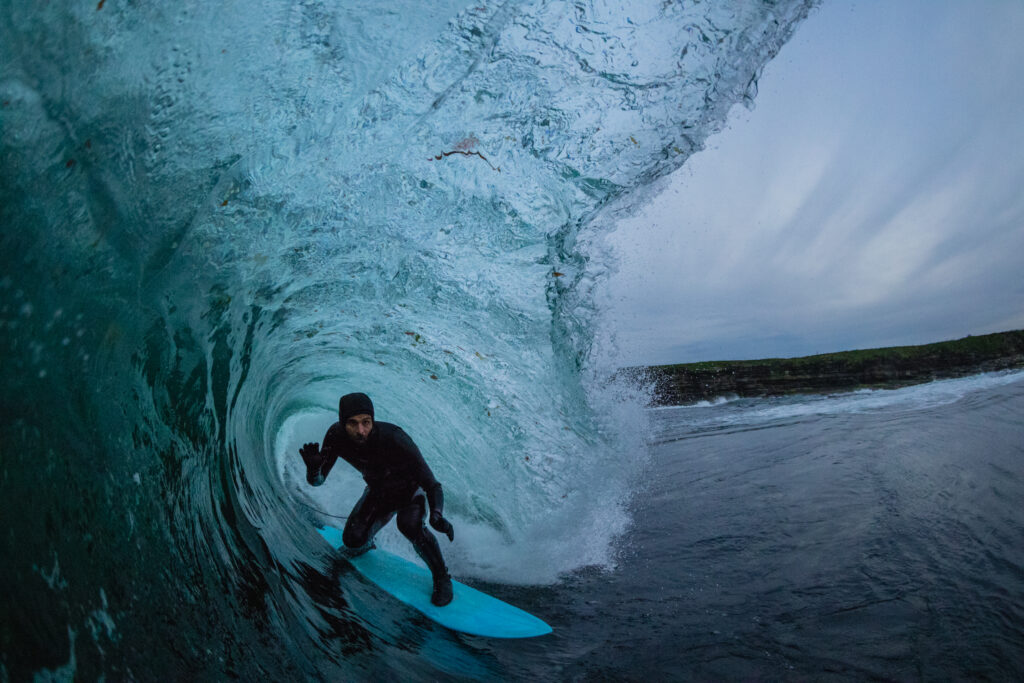 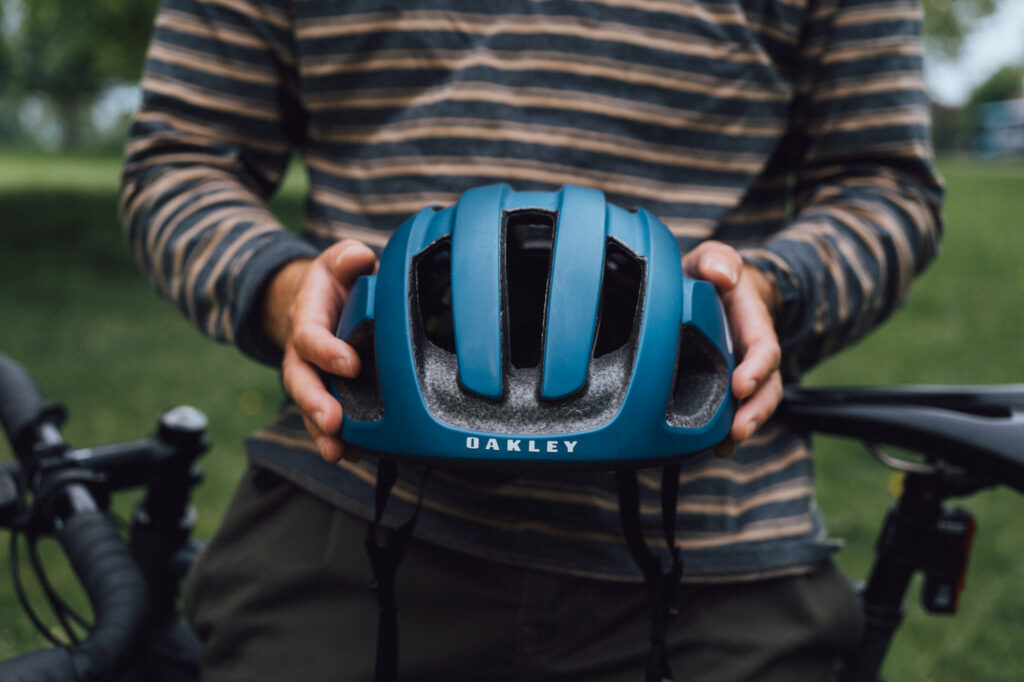 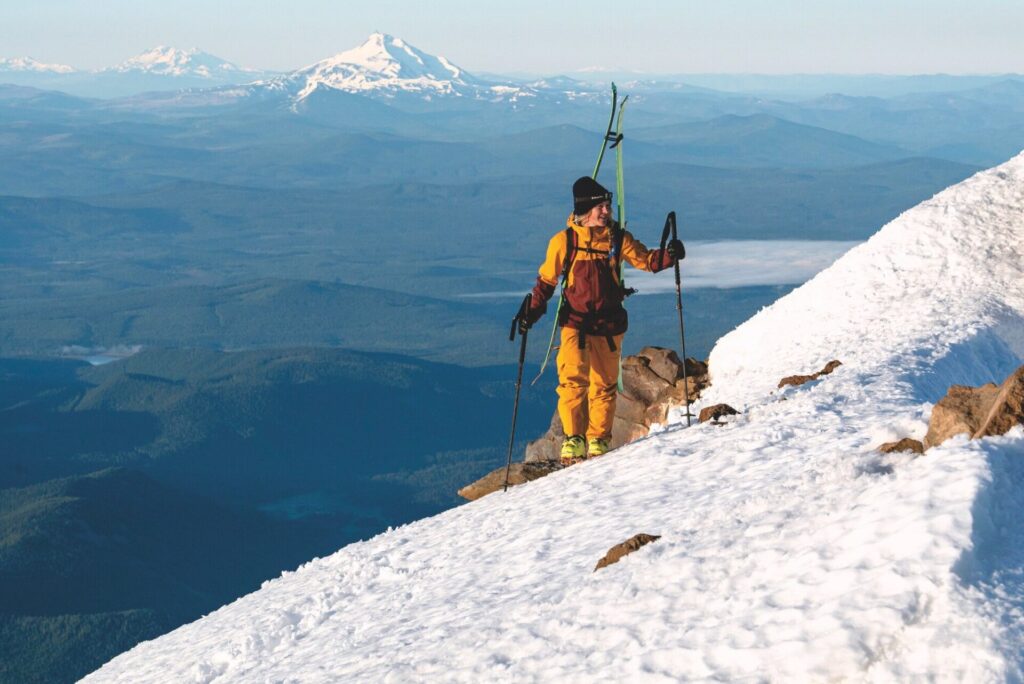 This is the story of the development of waterproof fabrics, and where we go from here 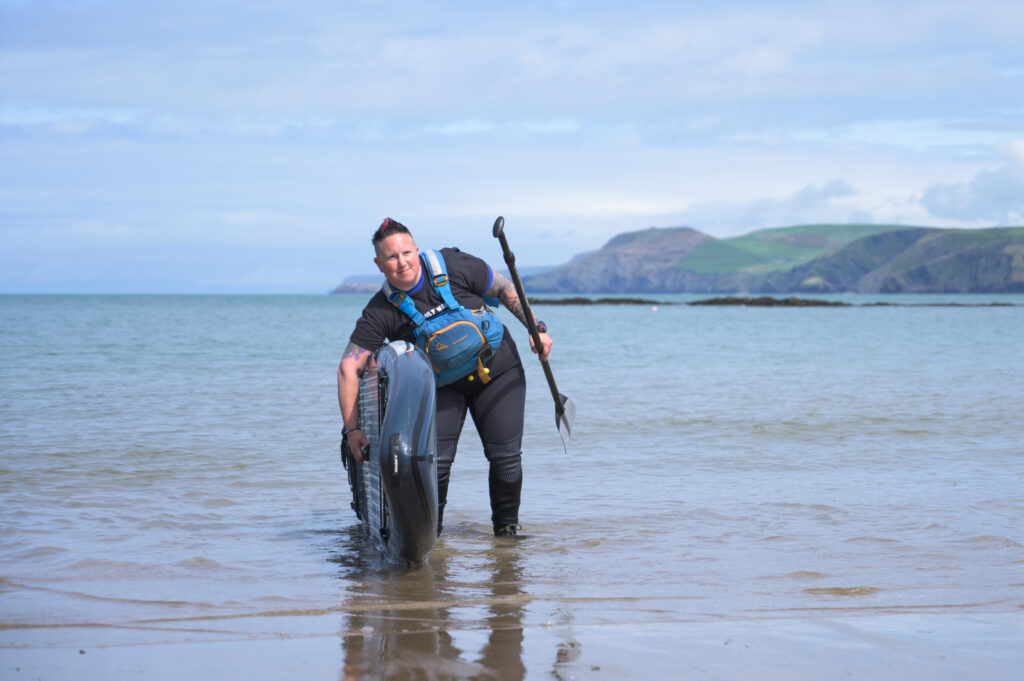